By Mike Unger | Photo by Gabriella Barrantes
Posted in From the DAC, Fall 2022

Alumna Karson Harris has moved on from playing lacrosse for Drexel, but she’s still racking up fresh stats. 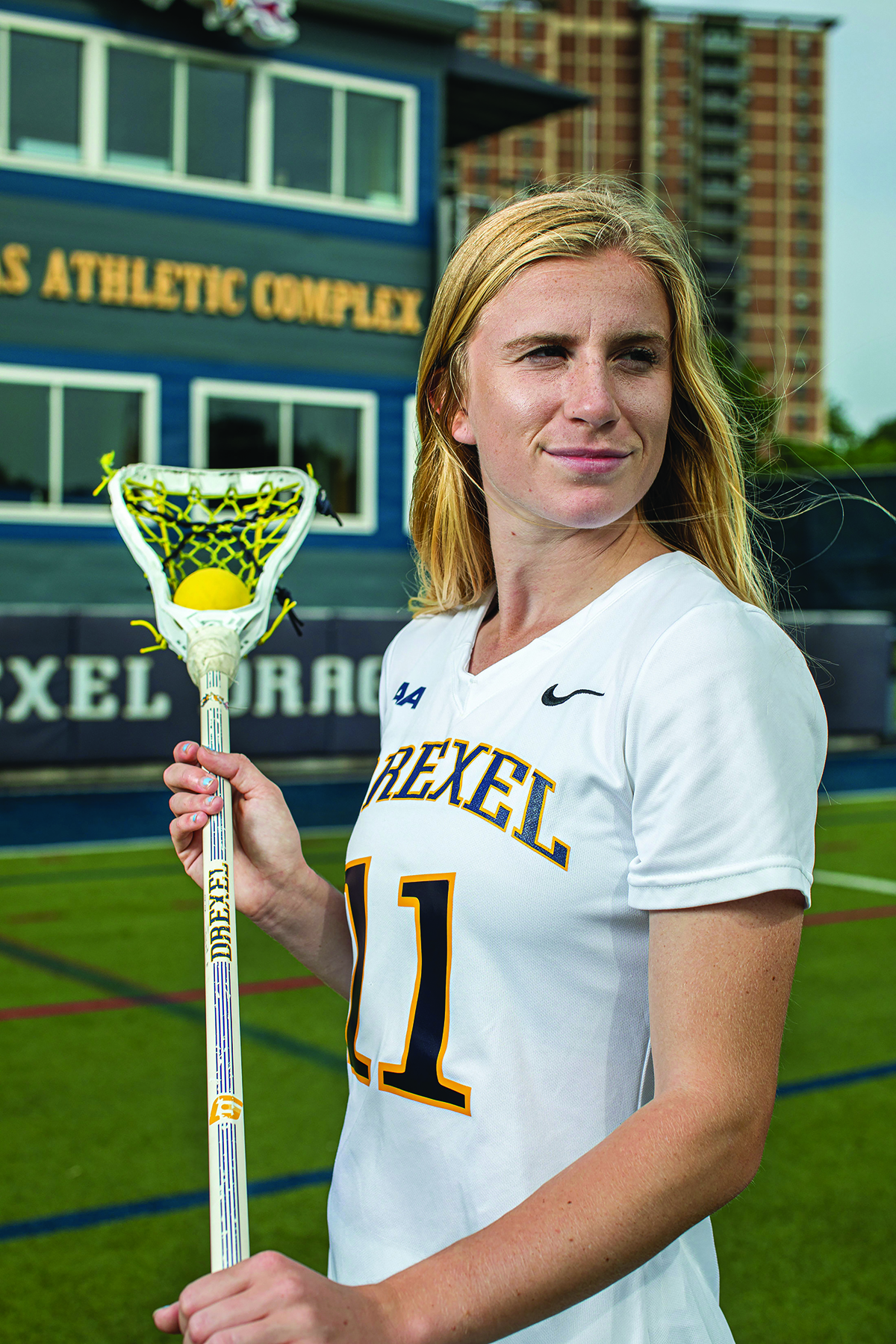 With the final seconds ticking away, Drexel trailed by one goal. Karson Harris (BS ’21, MPH ’22) wasn’t having her best game, but with everything on the line, she sought out the ball.

“Her stats were not very Karson-like,” says Interim Mary Semanik Head Women’s Lacrosse Coach Katie O’Donnell. “But at the end of the game when we needed the ball in the back of the net, she took on that pressure, as your leaders and your best players do.”

Harris scored with seven seconds left to tie the March 23 game at San Diego State, and the Dragons went on to win in overtime. The clutch performance was typical Harris, who during her five years on the lacrosse team was a star on and off the field. It was moments like these that prompted Harris’ fans in the Drexel Athletics Department to nominate her for the NCAA Woman of the Year Award on July 14. Eleven days later, she was selected by the Colonial Athletic Association (CAA) as the conference’s nominee for the prestigious award, which honors the academic and athletic achievements, community service and leadership of outstanding female college athletes. Harris is the first CAA nominee from Drexel since Gabriela Marginean (BS ’10, MS ’17) in 2010 and one of only 53 Division I nominees from the more than 220,000 female student-athletes competing across all NCAA divisions.

“Karson embodies the qualities we look for our student-athletes to illuminate in the classroom, competition and community,” says Drexel Director of Athletics Maisha Kelly. “She excelled on the field, leading our program to new heights with our first two NCAA Championship appearances. Her efforts in lacrosse are only exceeded by her exemplary work in the classroom. Karson’s legacy is highlighted by the culture she led for our women’s lacrosse program, as the team committed to excelling as students, athletes and people. We are very proud to see her recognized for her accomplishments.”

A native of southern Maryland, Harris was into horseback riding as a little girl. She didn’t consider herself very athletic, but after her father, Douglas, suggested she try lacrosse, the two had a catch in the back yard.

“I was better than everyone thought I was going to be,” she says. “It’s such a fast-paced game. It’s a team sport but you have so much control over what you do on the field. I love the strategy and the brain power it takes to be a good lacrosse player. It has to do with your athletic ability, but even if you’re not the most athletic you can always outsmart people.”

Harris received only one offer to play Division I lacrosse. Luckily, she was interested in the school that provided it. She knew she wanted to be a physical therapist and was attracted to Drexel’s health and sciences program.

“The first two years were a little rough,” she says of her career on the field. “There were some highs but mostly lows. My junior year we beat Rutgers and it was the first time we’d ever beaten a Big Ten school. At that point, I had hope in our future.”

The next season was the most magical in the program’s history. The team went 13-3 and made its first appearance in both the CAA Championship and NCAA Tournament. That year, Harris was named Drexel’s Colonial Athletic Association’s Female Scholar-Athlete of the Year.

After graduating with her undergraduate degree in health sciences, she came back for a fifth season while she earned a Master of Public Health degree in epidemiology. When her career ended, she was Drexel’s all-time leader in goals with 211 and the CAA career leader in draw controls with 351. She also earned Philadelphia Inquirer Academic All-Area Performer of the Year honors in 2022, recognizing her as the player in the Philadelphia region who combined the best on-field performance with high-level academics among players from all NCAA divisions.

“Karson works very hard, and she succeeds on the field and in the classroom. It’s not by accident,” O’Donnell says. “But she doesn’t take herself too seriously. That kid has a smile on her face the whole time in practice, the whole time in a game. She’s always had her teammates’ backs. She puts the team first. Of all the boxes, she checks them all.”

Harris is now pursuing her PhD in physical therapy at the University of North Carolina. Her goal is to work with veterans at rehabilitation clinics.

When she looks back at her career at Drexel, she can’t believe how far the lacrosse program has come.

“Playing in the NCAA Tournament isn’t something that, when you’re 4-12 your freshman year, you ever think is going to happen,” she says. “We got more big time than I ever thought [we] would.”

So did Karson Harris.