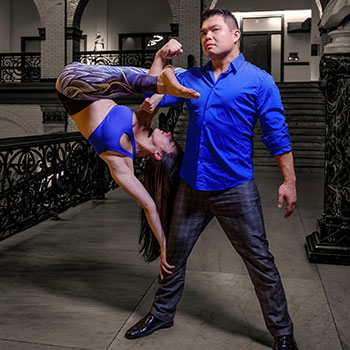 Rob Li has lifted people in twos, threes and sometimes more. He’s lifted people on water, sand, swings and snow. He’s lifted people here, there and everywhere. His mission to lift 10,000 strangers around the world combines body strength and Instagram filters with his own leisurewear line of clothing — and it’s super fun.

The photos on Rob Li’s Instagram feed (@TheMojoShow) are mesmerizing.

In one, a police officer in full uniform stands on Li’s shoulders outside an L.A. Fitness. In another, he hoists a Southwest Airlines flight attendant high over his head so that she looks like she’s flying through the terminal. The people, locations and exact manner in which Li lifts men and women into the air change, but one detail rarely does: the subjects are usually wearing big smiles on their faces.

Li, 38, is an “acroyoga” instructor and entrepreneur who developed a line of clothing for the activity, which is a muscular combination of acrobatics, yoga and Thai massage. The former Drexel and Sixers cheerleader is on a mission to lift 10,000 people across the world in five years. As of Dec. 9, he’d been to Miami, San Diego, Chicago and Taiwan, among other cities, and hoisted 5,579 people as part of a campaign he’s dubbed #RidetheRob.

“It’s very empowering,” he says. “People may be shy at first, but after a few seconds of talking to them, I’ll have an idea as to what I can do with them. I like to help people realize that they are capable of more than they think. If they have a cheer, dance, pole, or gymnastics background, then I may teach them a higher-level skill. Even if people don’t have a movement background, I’ll still lift them up. Their facial expressions go from sheer terror to absolute bliss and pure joy.”

The change I’d most like to see in the world is…
“people being kind to one another and helping others when they can. Imagine everyone doing nice things for other people and what kind of world that would be. It doesn’t take much, and anyone can do it at anytime. Make the world a better place. Experience all the feels.”

“I developed a shirt that is moisture wicking and is four extra inches longer in the torso because when you lift people above your head, your shirt will ride up to your belly button, which isn’t a good look,” he says. “I made the shirts fitted with the sleeves a little shorter so you can show off the muscles. There’s a crop top hoodie that has magnets in the hood so that when you do inversions, you don’t have to worry about the hood falling over your head.”

Li sells the athleisure wear, as he calls it, on his website and at studios where he teaches, such as Pinnacle Parkour in East Falls. He’s also developing pole wear, swimwear, bodysuits, formal wear for social dancing and performances, and clothing specifically for belly dancing. His biggest sellers are reversible leggings with Philadelphia Eagles green on one side and a winged print on the other.

Speaking of the Eagles, Li has lifted offensive lineman Todd Herremans and his wife Elizabeth…at the same time. He has also lifted Riley Cote of the Philadelphia Flyers, a state senator, a former Olympian, a few TV anchors, several flight attendants (one while 34,000 feet in the air), a WWE Divas Champion wrestler, a few mascots, a number of Uber drivers, and many groups of women from various bachelorette parties. Everyone, it seems, gets a boost from being temporarily liberated from the ground.

“I love to be able to meet random people, reconnect with old friends, or base friends’ family members and offer them happiness within a few seconds that leaves a lasting impression,” he says. “I’ve had a lot of people say to me, ‘That really made my day.’” — Mike Unger