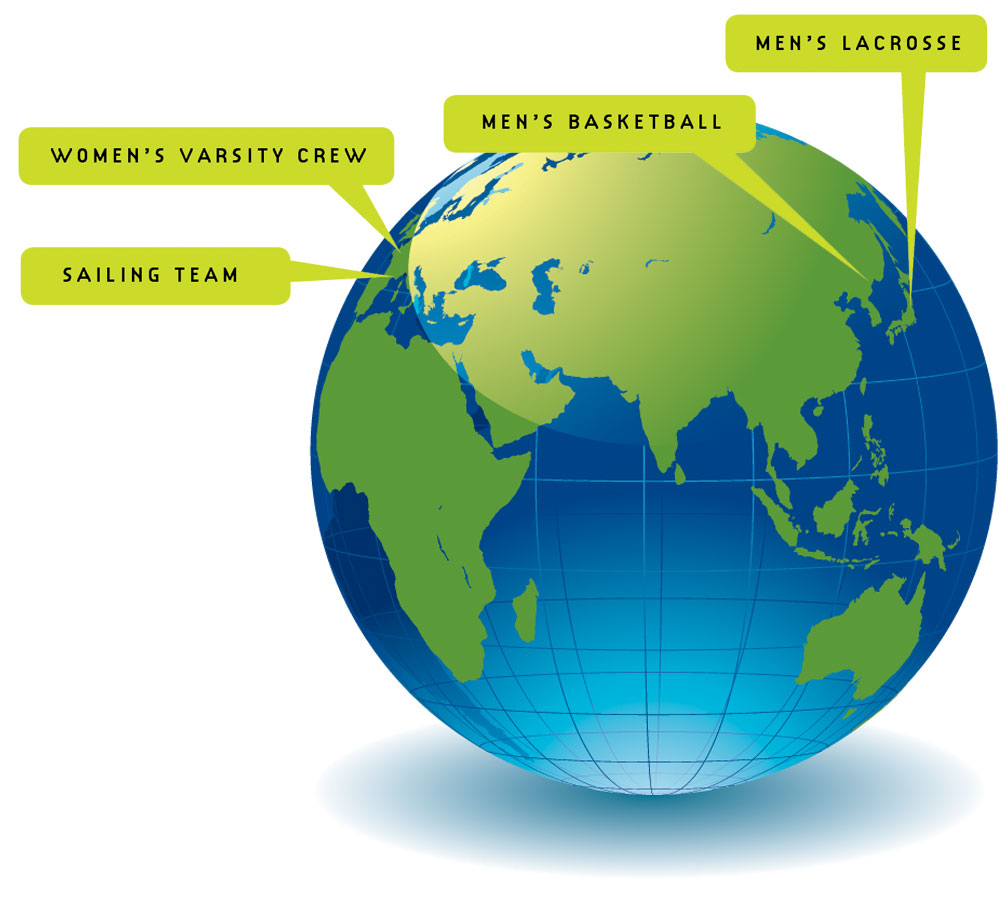 In a year’s time, Drexel University varsity and club athletes have crossed oceans four times to not just compete, but to carry the spirit of the United States and Drexel to foreign countries in Asia and Europe.

“A foreign trip allows our players a cultural experience that is immeasurable,” he says. “In addition, it fosters team chemistry, which strengthens all of our athletic programs.”

The men’s varsity basketball team traveled on an historic trip to China, scheduled to play four games during 10 days in the country, with visits to Shanghai and Beijing.

The trip was a good fit for Drexel’s growing relationship with China and
its overall international ambitions, says Zillmer.

“It makes perfect sense to align our institutional goals with those of our athletics department and use our Division I basketball team as global ambassadors for Drexel on and off the basketball court,” he says. “China is an emerging world power in men’s basketball and it will be exciting to see how Drexel measures up to this challenge.”

The men’s varsity lacrosse team participated in the Friendship Games in Tokyo, Japan, a trip that came just after the team’s appearance in the NCAA Quarterfinals.
Represented as a “goodwill tour,” the Drexel trip included matches against the Tokyo Representative Team and the Japanese National Team, as well as a lacrosse clinic and scrimmage matches. By staying with host families, team members had the opportunity to experience real Japanese culture through sightseeing trips around Tokyo.

The women’s varsity crew squad took their second trip to London, England, to vie for the Sports Council Cup, the highest award of the Henley Women’s Regatta, along with more than 1,000 competitors from around the world.
Held in the town of Henley, the race pits two boats against each other in a straight shot down a segment of the River Thames.

The Drexel sailing team, a club sport at the University, crossed the pond to Les Sables-d’Olonne, France, to compete in the 46th EDHEC Sailing Cup, the world’s largest intercollegiate sailing event (full story on page 24). Approximately 3,000 students from 24 countries around the world raced aboard nearly 200 boats in what is considered the most prestigious collegiate sailing event in the world.

But the trip didn’t come without some drama. No one on the Drexel team spoke French, the weather was brutal and toward the end of competition a mast on the team’s 31.3-foot sailboat, the Grand Surprise, snapped, forcing them to leave the competition. Through all the hurdles, though, the team returned triumphant in the fact that they had made it to France and been able to sail.