By Mike Unger
Posted in Summer 2022, From the DAC

Maisha Kelly, who became Drexel’s director of athletics last year, reflects on the forces that shaped her trajectory and brought her back to her hometown. 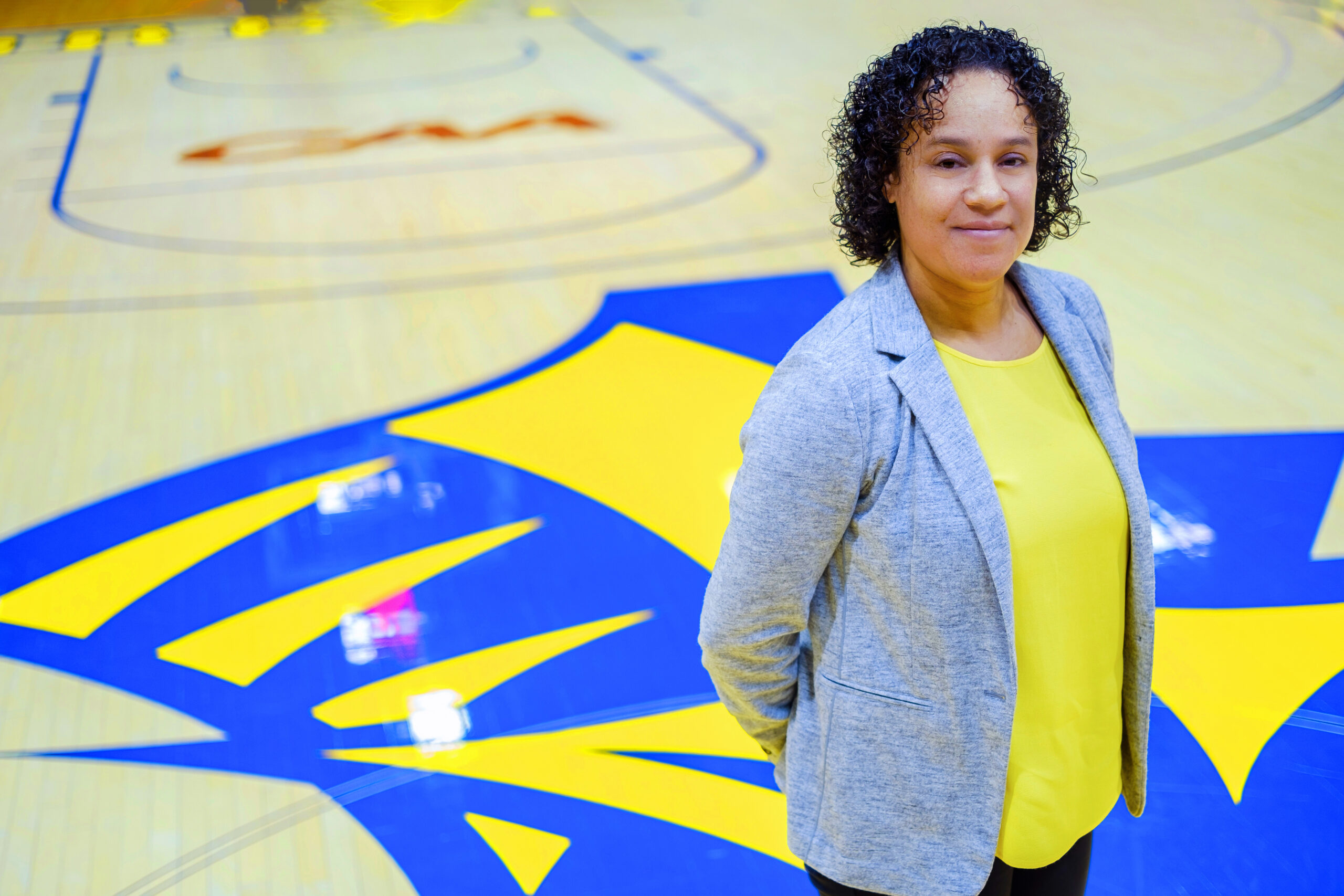 It’s always game time at the Kelly household. On this Friday afternoon in early November, Maisha Kelly is planning to pick up her children Gregory, 7, and Kennedy, 5, from school so they can head to their new home away from home, and her new workplace — the DAC. The men’s and women’s basketball teams are playing a doubleheader, and the Kellys can’t wait to root for their new favorite school. (Her husband, Kevin, is an assistant track and field coach at Temple University, so their kids are presumably Owls fans too, at least in one sport.)

Kelly was tapped to become Drexel’s new director of athletics in June 2021, making her the first Black woman to direct athletics at a Division I school in Philadelphia. She replaces Eric Zillmer, who decided to step down in the spring after more than two decades of service. The job is a homecoming for Kelly, who was born and raised in West Mount Airy, in the northwest part of Philadelphia. She earned her undergraduate degree from Saint Joseph’s University, where she ran the 400 and 800 meters on the track team and has a master’s from Temple.

“It’s home,” she says. “I love this city because I think it’s a tough city, and not just because of Rocky. I love the diversity of Philadelphia. I grew up in one of the most diverse neighborhoods, so given my background of being biracial, it’s just such a rich city.”

Prior to coming to Drexel, Kelly served as Bucknell University’s senior associate director of athletics and senior woman administrator. During her more than 10 years at the school, she oversaw as many as 12 of the 27 varsity athletics programs. She also served as the athletic department’s liaison to the academic deans, human resources, financial aid and admissions, student affairs and NCAA compliance. Kelly spearheaded the department’s long-range planning, served as the university’s deputy Title IX coordinator and played an active role on the President’s Diversity Council. In 2011, she created the athletic department’s first student-athlete leadership development program, and in 2020 organized the Bucknell Athletics Diversity, Equity and Inclusion Council, comprised of administrators, coaches and student-athletes.

Drexel Magazine spoke with Kelly via Zoom about the benefits of being a student-athlete, her goals at Drexel and the landscape of collegiate athletics today.

Q: When did you first get involved in athletics?

A: I always played football in the streets with the boys, and was on the basketball courts. My first sport was swimming. I swam for Philadelphia Parks & Recreation, where city kids got a chance to learn how to swim and then become part of a competitive team. I also learned to play tennis as another early sport. I began, probably around seventh grade, to get really involved in track and field. That just ballooned to become the only sport I did in high school through college.

Q: What did you learn about being a student-athlete during your time at St. Joe’s that you still draw on today as an administrator?

A: Resilience. As a high school student, I was a state champion in Pennsylvania, and there are great expectations that come with early success. And great pressures. Oftentimes, it’s how you react and respond to it. I went through those roller coaster battles. I had a group of champions around me — certainly my mom was my biggest champion. But I had champions in my head coach, the athletic director, my history professor who was the chairman of the department. These people believed in me on or off the [track].

Q: What did serving as a captain of the St. Joe’s track and field team teach you about leadership?

A: There is a power in your voice. It was really my senior year when I started to get more laser focused. A women’s track and field program is 35 to 40 people, and you have to figure out how, those times when coaches aren’t around, you’re helping to build the group and bring people together toward a common goal.

Q: Did you always know that you wanted to get into higher ed athletic administration?

A: No. I thought I was going to be a doctor, but then I realized I didn’t particularly care for seeing blood. Then I was a history major and I thought I’d pursue law school, but I realized I didn’t want to be in school for so long. I loved learning but I just don’t know that I had four or five more years of school in me. So I got a secondary education degree. My first career was actually as a sixth-grade teacher. In the meantime, I learned that you can make a career in intercollegiate athletics.

Q: You worked for the NCAA in Indianapolis as assistant director of championships. What did that job entail and what did you learn about running a Division I athletic department by working on the NCAA side?

A: There’s no other place where you can [learn] what the broad spectrum of intercollegiate athletics is, the kinds of institutions that comprise Divisions I, II, and III. Division III Oshkosh, Wisconsin, was the first championship that I did. I came back to Pennsylvania to do Division II championships, and I spent multiple weeks at Texas A&M University and University of Texas, so I really had the opportunity to work with administrators and coaches across the spectrum. I learned decision-making, how organizations run, and communication.

Q: You stayed at Bucknell for almost 11 years. What did you like so much about working there and what are your proudest accomplishments?

A: Initially, I liked just getting back to a campus, one where athletics and academics are done really well. There was really great balance. I look at athletics as a way of life and at Bucknell, it was really easy to do that. Shortly after my husband and I got married, we had kids, and it was easy to be able to do our two jobs in a way that worked for our family.

We started a Bison Leadership Academy, where we organically built a leadership program. The program became endowed, and the endowment allowed for a full-time staff person committed to leadership programming for student-athletes. Toward the end of my tenure, we launched the Student-Athletes of Color Affinity Group. I remembered my experiences at a predominantly white institution, and I was lucky enough to be part of a team and be in a city that had terrific values.

Q: Why did you want to come to Drexel?

One of the first things I did was I read the strategic plan and the Anti-Racism Task Force’s Report. I thought, ‘This is an institution that is being quite intentional. They are pausing their work in the moment to really do some things relative to issues that are important to me.’

Then I looked at the basketball teams’ success, and I saw what the lacrosse programs were doing, and then I learned that Drexel is a much different place than when I left the city in 2004. I thought, ‘Wow, here is an institution that has grown tremendously in the last 20 years.’ The student population, the fact that Drexel is an R1 institution, the number of programs that exist, and the diversity of the staff, faculty and students, it really resonated with me.

Four months in, that’s what I’ve started to learn. There are good people who work here, and there’s a lot of opportunity and promise.

Q: What are your priorities at Drexel?

A: Always the No. 1 priority is student-athletes and their experience. We want them to excel academically; there is such a broad scope of intellectual pursuits they can pursue. They have a set of talents that we need to develop to help the competitive success of their programs. It’s a way for them to develop themselves and their skillsets. Just the same as academic programs, and certainly our co-op programs, having really strong successful athletic programs helps to develop our university brand. All that gets rolled into helping student-athletes be good people. Preparing them to be leaders, preparing them to be good citizens, regardless of what communities they currently exist in or venture into.

Q: What would you want casual fans to know about the student-athlete experience at a school like Drexel?

A: There isn’t an experience on a college campus like that of a varsity student-athlete, where you get to be on this platform. You’re lining up for competition, and there are results and they’re publicized. It’s a huge time commitment. At Drexel, you’re also doing that as a co-op student. No other kind of institutions, separate from other co-op schools, can say that there’s this intensive approach and experience that our student-athletes get to have, as it relates to their fitness for life. It’s physical. It’s academic. It’s professional.

Q: Issues that people hear about surrounding college athletics like name, image, likeness and conference realignment — how important are those things at a school like Drexel?

A: They’re important. Are we going to get the seven-figure promotion deal? I don’t think so. We probably won’t even get the four-figure advertising or promotion deal. But the importance of it is to understand what the opportunity is, and how to manage and engage in that opportunity. For our student-athletes, the opportunity now becomes: We’re going to educate you and talk about brand. What does your personal brand mean? What are your values? Those are things you should know separate from being able to make money in this space. Also, it’s the right thing for student-athletes to be able to engage the way their non-student-athlete peers do.

Conference realignment is very important to us, too, because you’re known by the company you keep. You want to be sure that you’re with a collective of member institutions that are aligned with your values, which for us are institutions that are well situated and well thought of in the academic space. Does it create an opportunity for us to compete among some of the best of our peers? You should always understand the landscape in which you’re operating.

Q: How does existing in a city with so many professional sports teams help or hurt Drexel?
A: I think it helps Drexel. [Men’s basketball coach] Zach Spiker is the one who really likes to amplify these reports that [Philadelphia 76’er] Matisse Thybulle was on our campus this summer, working out with our guys. We have some opportunities and relationships on which we can build. We’re going to host the NCAA lacrosse championships, and we get to partner with the Eagles at Lincoln Financial. It helps us to be able to gain synergy. There’s a place for five institutions within Philadelphia, six with Villanova. There’s a rich collegiate landscape as well as the professional landscape. There’s a place for us all.

Q: Do you have a favorite cheesesteak?