By By Lini S. Kadaba
Posted in Features, Winter/Spring 2022

When all looked grim in the summer of 2020, Angela Dowd-Burton knew there was cause for optimism in the story of her own life and those of her fellow Black alumni. 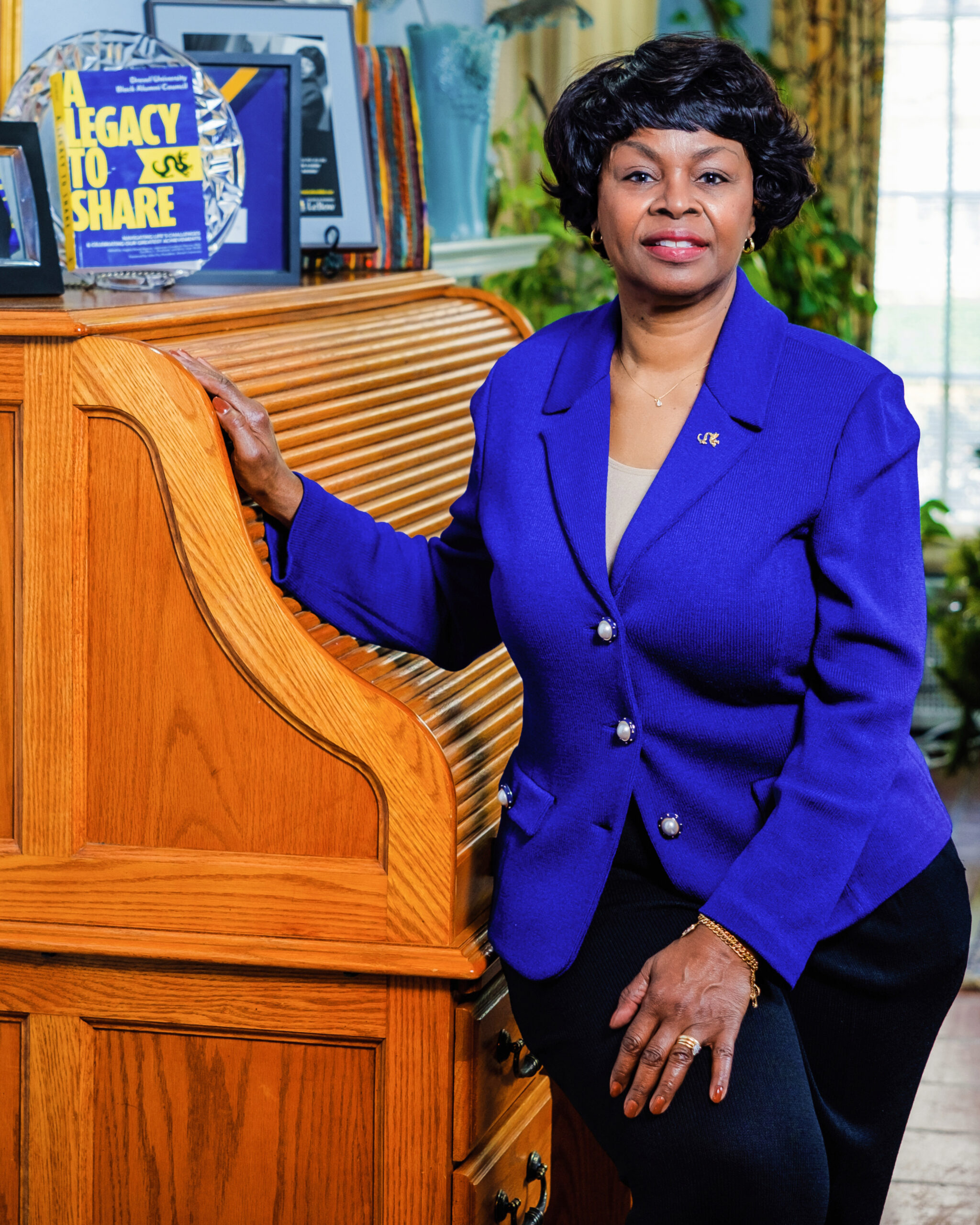 Like so many, Philadelphia businesswoman Angela Dowd-Burton ’74, MBA ’79 felt the weight of the summer of 2020 as dire events unfolded daily. The pandemic was raging, the economy was sagging, and protestors were demanding social justice.

At the same time, 2020 marked the 50th anniversary of a decade in which Drexel welcomed the largest incoming wave of Black students — more than 300 — in its history. As she reminisced with Black alumni from the ’70s in a virtual gathering, she felt her spirit buoyed by their stories of success.

“Whether it was print, radio or television, it’s telling me how challenging things are,” recalls Dowd-Burton, who is a Drexel trustee and CEO of DowdBurton and Associates, a business development consultancy. “I went back to that sharing of positive stories and the resilient nature of the alumni.”

A seed of an idea was planted — a book to celebrate the University’s Black alumni over 50-plus years and to inspire the next generation of graduates. In just 18 months, Dowd-Burton corralled a cast of dozens in her quiet, persistent way. Working single-mindedly, she enlisted the help of Shardé Johnson, director of Drexel’s Center for Black Culture; and Kimberly Gholston, vice president and chief diversity officer; as well as the Drexel University Black Alumni Council (DUBAC) and its president, Jerry Martin ’77. The Drexel Publishing Group, a hands-on learning program for students, lent production and design assistance.

In just one year — a grueling pace for book publishing — she and her collaborators created “A Legacy to Share: Navigating Life’s Challenges & Celebrating Our Greatest Achievements.”

The book launched in a virtual event on Jan. 22 and will be available for $25 in the Drexel bookstore and online through the Drexel University Black Alumni Council.

“I strive to find the positive, the light if you will,” Dowd-Burton says. “I wanted to produce good news … in an environment where people were losing hope.”

Through essays and a few interviews, the 391-page book chronicles the personal stories of 52 Black alumni. “Legacy” opens with historical pieces on William Sidney Pittman, Drexel’s first Black graduate who earned a master’s in architecture in 1900; the pioneering Black student hosts of The Black Experience in Music WKDU radio program in the ’70s and early ’80s, and other trailblazers.

President John Fry called the essays an “essential” read. “The writers’ memories on these pages,” he notes in the foreword, “stand as an important contribution to a continuing conversation on equity, inclusion and justice.”

“The stories themselves are intrinsically powerful,” says David Unruh, Drexel’s senior vice president of institutional advancement, whose office provided financial and staff support for the project. “This book calls attention to the fact that the University has been committed to student access for a long period of time and we continue on that ongoing journey of being a place of inclusion.”

The alumni highlighted in “Legacy” include a NASA scientist, architect, doctor, fashion designer, FBI agent, tech pioneer, college president, movie producer, airline pilot, pro-basketball player and on and on. To a person, they credit Drexel with giving them skills to succeed. The journey was not easy. There are mentions of isolation, stereotyping and racially tinged encounters, but beyond the challenges of being Black at a mostly white school, the tales return again and again to resilience and a laser focus on success.

More than one alumnus writes about studying at the library for hours, juggling tough course loads while working jobs to pay for books. Others recall upbringings in which college was not a matter of if, but where. All acknowledge parents or mentors who guided them through childhood, college and career.

Marcella D. Stokes ’08, a distinguished Gulf War veteran and mechanical engineer working for the government, says “Legacy” serves as affirmation for the future. “I never felt my mark was or would ever be felt in the corridors of Drexel,” says the 51-year-old Philadelphia native. “This book will serve that purpose. We exist.”

Raised by a single mother in an area of North Philadelphia where the crack epidemic raged, Stokes could have strayed. Her mother’s fortitude, as well as her own determination, plotted a different story — one of perseverance.

In “Legacy,” Stokes wrote: “Engineering has always been in me. My education provided me with the experience to draw out that which was already within me. Though I have stood firmly at the intersection of caste and gender, I found another voice where I added value to complex scientific conversations and my unique experiences added to the tapestry of intellectual discourse.”

Business administration major Yanatha Desouvre ’01 is an entrepreneurship professor at Miami Dade College and Haitian American film producer who lives in Miami. In his essay, he recounted the importance of education to his immigrant family and his belief in Drexel’s motto of “Ambition Can’t Wait.” “Everyone has a voice,” the 43-year-old says. “[Everyone has] stories of struggle that transformed into strength, overcoming moments once thought as impossible, turning pain into power. The book is evidence that destiny favors the bold.”

In her essay “Dream Big!,” Dowd-Burton describes coming to Drexel to study accounting and business in the ’70s as “not perfect” but “transformative for a young, Black girl who spent her elementary summers in Rocky Mount, North Carolina … chasing chickens; hoarding pecans; and learning to process cotton and tobacco crops on her great-grandparents’ and uncle’s farms.”

The University’s fast-paced quarter system, she wrote, “instilled in me a fortitude for exploration and speed, a competitive spirit, and a level of confidence I needed as a foundation for a successful career.”

That career encompassed stints in corporate finance, roles in the mayoral administrations of both Wilson Goode and Michael Nutter, and a place on the executive team of Rohm and Haas Co. and at the nonprofit Women’s Business Development Center. She also has given back to her alma mater, serving on its Alumni Board of Governors, the LeBow College of Business Advisory Board and since last year as a trustee. In 2015, she was inducted into the Drexel 100, which recognizes outstanding alumni.

“She’s a special kind of leader,” says Geoffrey L. Howland ’76, MS ’83, a retired energy manufacturing executive who lives in Dallas and is one of the co-editors of the book. “She leads by example. She leads by listening.”

Howland, a mechanical engineer with a master’s in engineering management, says he welcomed the opportunity to participate on a project that he views as particularly valuable to the next generation.

“Being a Black man, I am imagining if I had this book in my hand when I was a senior in high school or freshman coming into Drexel,” he says. “If I had read all these stories of successful Black people and what they went through for that success, I think it would have further changed my trajectory of where my head was and where I was going.”

“Legacy” is available for purchase at bit.ly/dubaclegacy.

Be a part of the DUBAC Scholarship