By Kevin Rossi
Posted in Summer 2022, From the DAC

For Chris Donovan, becoming the second Dragon ever selected in the MLS draft isn’t enough. He wants to play in the pros. 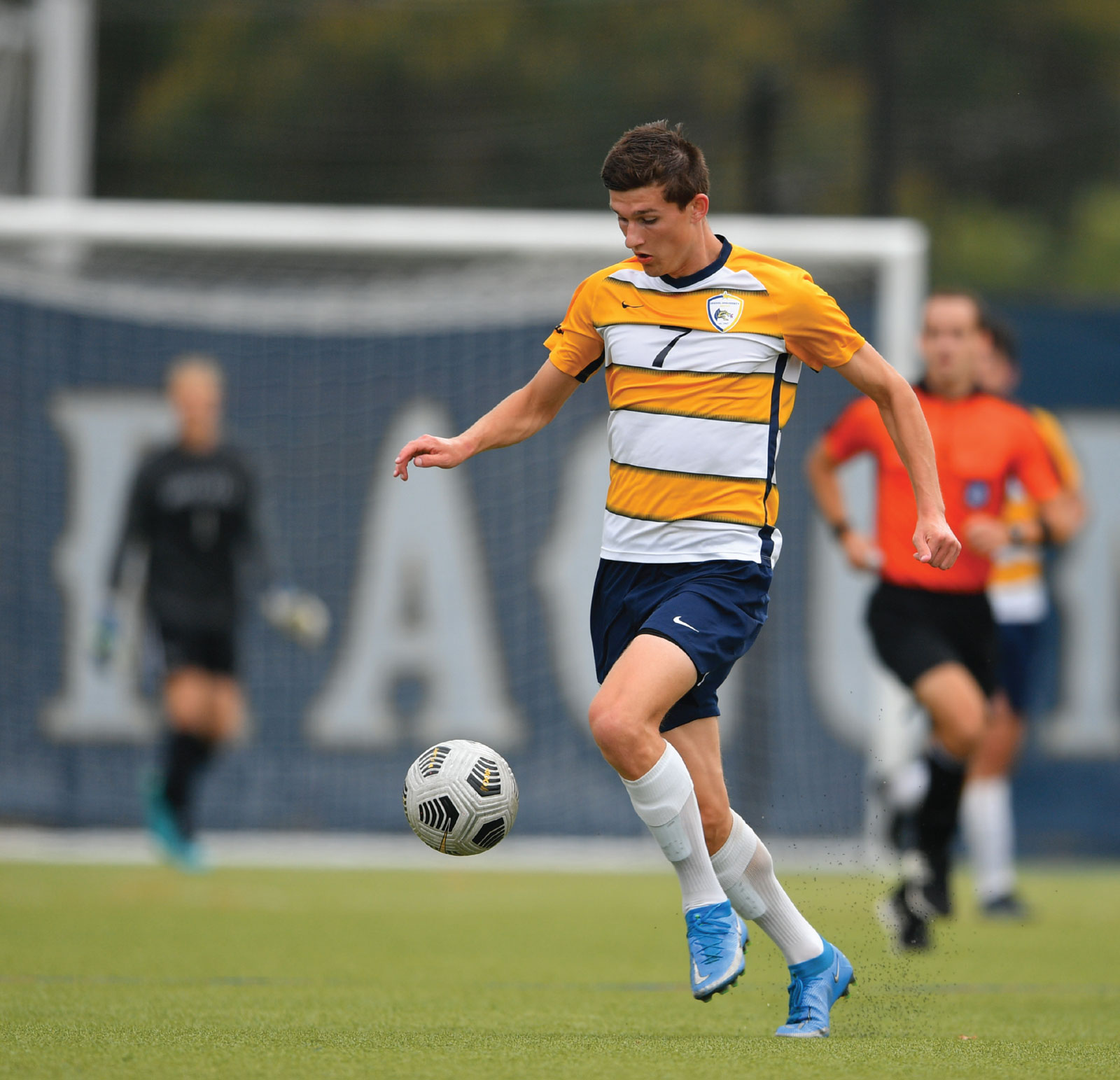 Chris Donovan is not one to settle. There’s always more to achieve to get to the next level.

In January, Donovan (BS sport management ’22) was selected by the Columbus Crew in the third round, 68th overall, of the Major League Soccer SuperDraft, joining Jeff Parke ’04 as the only players in Drexel history selected in the pro draft.

“Ever since soccer became my main sport,” Donovan says, “that was when I was going to be a professional athlete. From then on, that was the goal.”

While proud to be drafted, he knew the selection was only a promise for a tryout, not a guaranteed contract. When his stint with the Crew ended after training camp, he knew he still had work to do to reach his dream.

“It was always going to be tough to make the team,” Donovan says. “I didn’t get many chances. I spent more of the time off to the side with a couple other trialists. I was trying to make myself get noticed, but that was going to be tough.”

In March, he signed with the Philadelphia Union II, formerly the Bethlehem Steel, in MLS NEXT Pro, a new professional league that develops players for the MLS.

Now he has another shot to stand out from the pack and he intends to make the most of it. “It’s a certain type of greediness in the game, just wanting more, and being willing to do the dirty work,” he says. “The things you don’t think get noticed, the coaches, the people who really matter realize them, and it helps the team a lot.”

A multisport athlete growing up, he dropped basketball while at Conestoga High School to dedicate himself to soccer. As a senior, he earned 2018 Gatorade Pennsylvania Player of the Year honors.

“Playing professionally was always the goal, but I would always play down the possibility,” Donovan says. “I had a good senior year and a lot of people started talking about that being a possibility, but it was really important to shut that out, because it was still four years of college away.”

Drexel offered immediate playing time, so he quickly committed. Once on campus, he relied on his offensive talents, like controlling the pace, movement off the ball and aerial skills. After Donovan’s strong sophomore season, Michael Marchiano took over as head coach. Donovan says the fresh direction “lights a fire under every player.”

“We allow players, whether it’s Chris or anybody else, to drive their development,” Marchiano says. “How hard do they want to be pushed? How high do they want to dream? We set very high standards in our program.”

Donovan credits Marchiano with pushing him to improve his defensive effort to set himself apart from offensive-minded forwards.

“For me, that was it,” Donovan recalls. “That was the main thing I improved, especially throughout my final two years. It’s what would turn me from an average player into a good player.”

Donovan completed a decorated Drexel career. He won numerous awards, notably 2021 CAA Player of the Year, 2021 CoSIDA Academic All-America Second Team, and three first-team CAA selections. Still, he maintains, “for me, it’s not about the awards.”

“It’s just getting to a higher and higher level,” he says. “The goal is to get to the MLS.”

Never settle. That’s how Chris Donovan will achieve his dream.