While Everyone Was Away

Drexel welcomed everyone (in person!) back to a very different campus this fall, and we’re not talking about COVID changes. There’s a sensational new squash center, two lovely public parks, a community K–8 school and more — because Drexel doesn’t stand still, even for a pandemic. 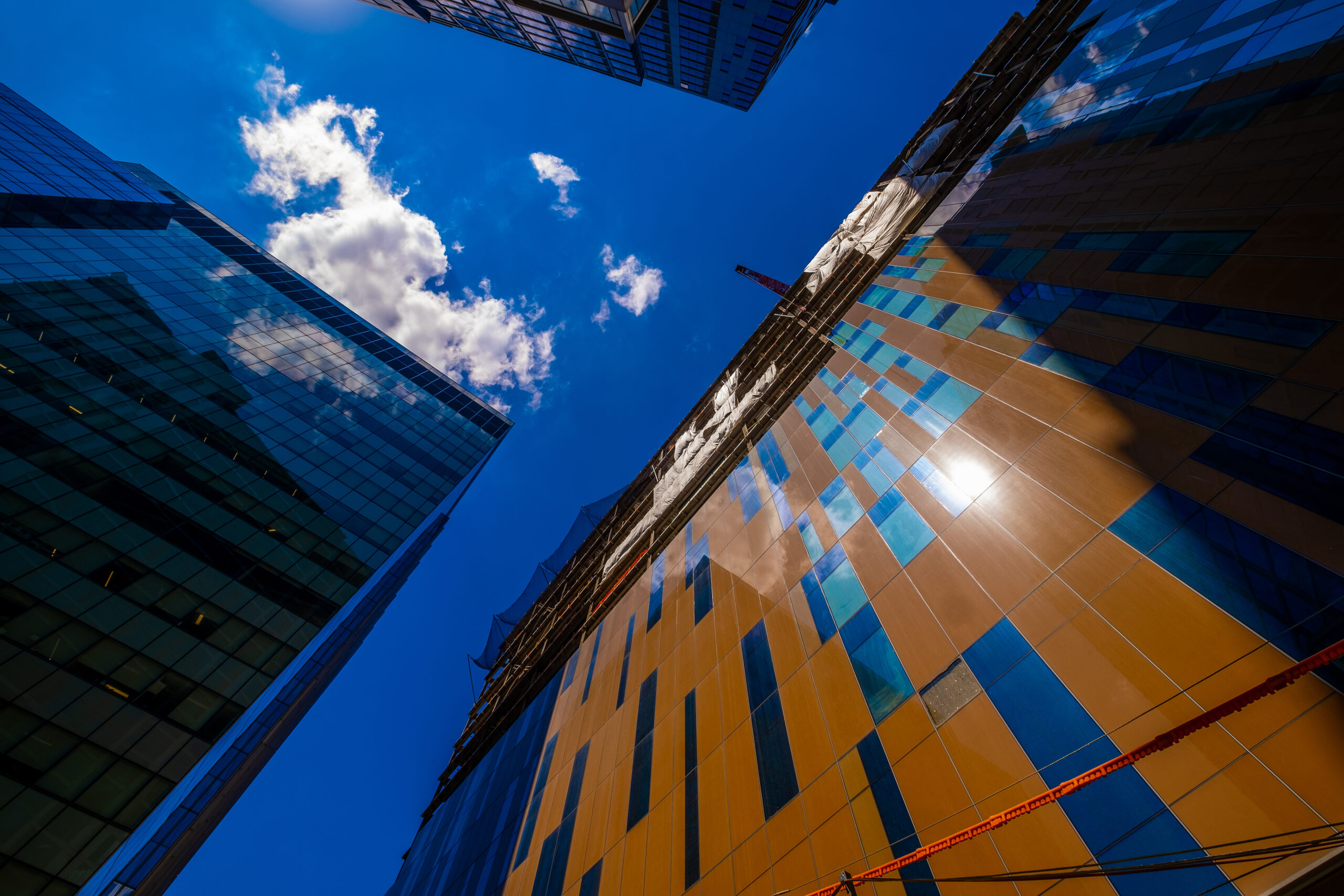 While Everyone Was Away

During the COVID shutdowns, it was hard to miss images of time seemingly standing still: calendars hung in absented workspaces still flipped to March 2020 … out-of-season menus in the windows of shuttered restaurants still teased the planned fare for spring well into summer, fall, winter … event posters adorned the walls of bathroom stalls, promoting concerts or gatherings that never took place.

Some signs like this are still visible in parts of the country and the world. But on Drexel’s campus, as workers returned to offices and dormitories, and classrooms fully reopened for the school year, life looks very different. Not only is campus buzzing once more, but the University and its partners have proceeded with transformations that have permanently improved the landscape, the skyline and campus life.

From new parks along Market Street, to the rising office and academic towers of uCity Square and Schuylkill Yards, the past year and a half have brought the University measurably closer to realizing its ambitions to define West Philadelphia as a hub of innovation and community engagement.

If you haven’t visited campus in a while (or couldn’t!), take a virtual stroll and reorient. And know that no matter how long you’ve been away or what has changed, you’re a Dragon, and this is home. 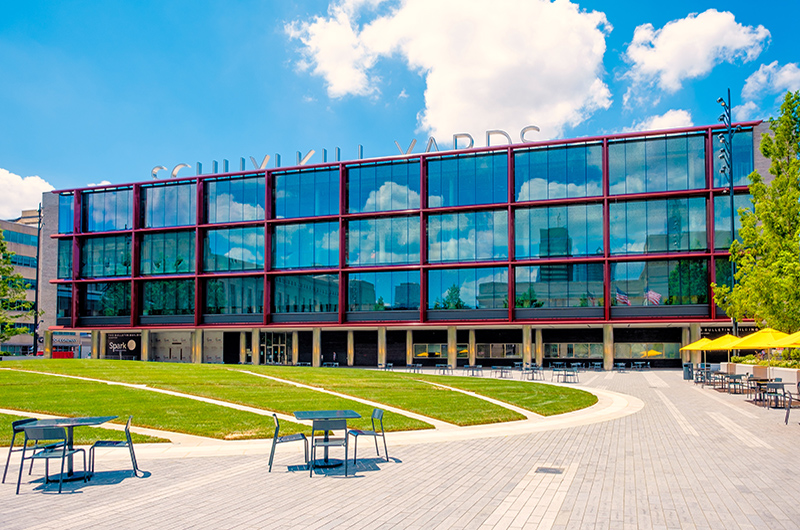 When the world went into lockdown in March 2020, this 1.3-acre park at 30th and Market streets named Drexel Square was an unadorned knoll surrounded by construction barriers. Over the past year, the redwood saplings encircling the park have grown tall and shady and the café tables under yellow umbrellas have made it a popular outdoor eating spot, as well as a locale for community events like yoga classes. On the park’s western edge, the 1950s modernist Bulletin Building (leased by the gene-therapy biotech Spark Therapeutics) emerged from a $43 million rehab this year with a contemporary glass front and new street-level retail. Currently, work is being finished alongside the park to the south, where a SEPTA subway entrance is being replaced and upgraded. 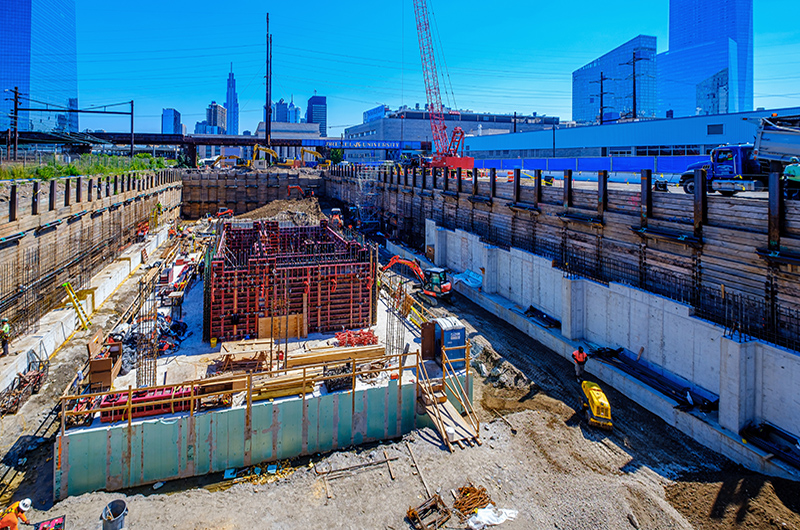 The construction site of the future West Tower at Schuylkill Yards, as of September 2021.

Immediately to the north of Drexel Square at 3025 JFK Boulevard is a deep hole in the ground that marks the foundation of what will become The West Tower at Schuylkill Yards. The 570,000-square-foot mixed-use building is the first building to be raised by Brandywine Realty Trust as part of Drexel and Brandywine’s “Schuylkill Yards” master plan. It will add a mix of residential rental units, life sciences and innovation office space, retail and indoor/outdoor amenity spaces to Drexel’s campus. Construction commenced in March 2021 and is anticipated to be complete in late 2023. Brandywine is also drawing up plans and permits to build a new stand-alone lab building at the intersection of JFK and Market streets, in the former Santander Bank building site at 3151 Market St. The 450,000-square-foot building will house lab and lab-support spaces. 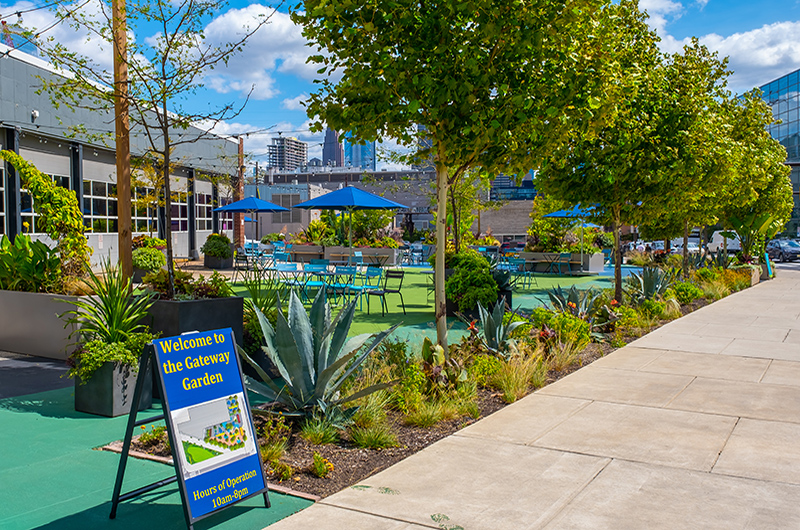 Dragons have a new green space at 32nd and Market streets called The Gateway Garden at Drexel University, which opened in May, in collaboration with the Pennsylvania Horticultural Society. This little oasis came to life over the summer with flora, as well as with regular programming like the near-weekly Maker’s Market featuring local vendors and 21-and-over events like cider and beer tastings. These programs will continue throughout the fall term, and Gateway Garden is available to reserve as an event space for Drexel departments and student groups.

Conversion of the Armory into US Squash headquarters and courts 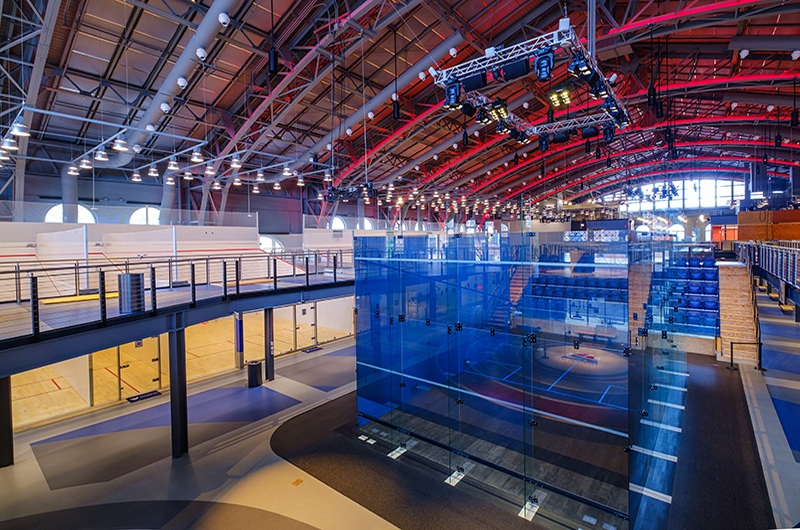 The interior of the facility. Photo credit: Jeff Fusco.

The former Drill Hall in the Pennsylvania Armory at North 33nd Street and Lancaster Avenue¸ which formerly housed basketball courts, has been transformed into the Arlen Specter US Squash Center. The facility is the world’s largest community squash center, serves as the home for Team USA athletes, and will host numerous events throughout the year ranging from local high school leagues to U.S. Championships. Construction of the Specter Center was primarily completed by the summer, and activity now is ramping up rapidly. The center includes state-of-the-art competition and training facilities — including 20 squash courts — the U.S. Squash Hall of Fame, a Learning & Innovation Center with classrooms serving local public school students through the SquashSmarts program and the US Squash National Headquarters. Players of all ages from across the city, including Drexel Dragons, can access the facility through free learn-to-play public clinics and low-cost memberships. The creation of the Specter Center builds upon the strong partnership between US Squash and Drexel, which has proudly hosted the U.S. Open Squash Championships at the University’s Daskalakis Athletic Center since 2011. The 2021 event will now move across the street to the Specter Center, bringing world-class athletes to Drexel’s campus this October. 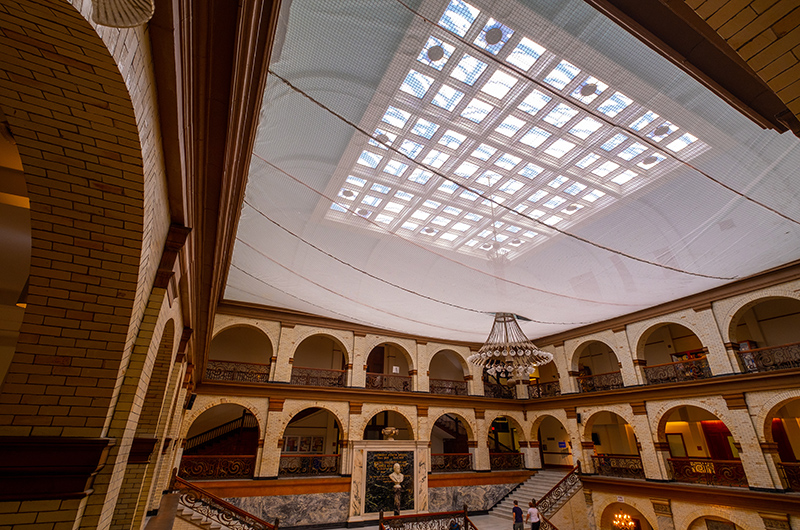 Renovations to Drexel’s Main Building began before pandemic shutdowns, and the roof and skylight restoration are now complete. Now that the plaster is protected from the weather, the interior ceiling will be repaired and restored. This process is expected to begin in mid-October and finish in late January 2022. Other buildings throughout campus are also being worked on as they undergo regular façade maintenance this year. For example, repairs to Van Rensselaer Hall, the Academic Building and the General Services Building began over the summer. 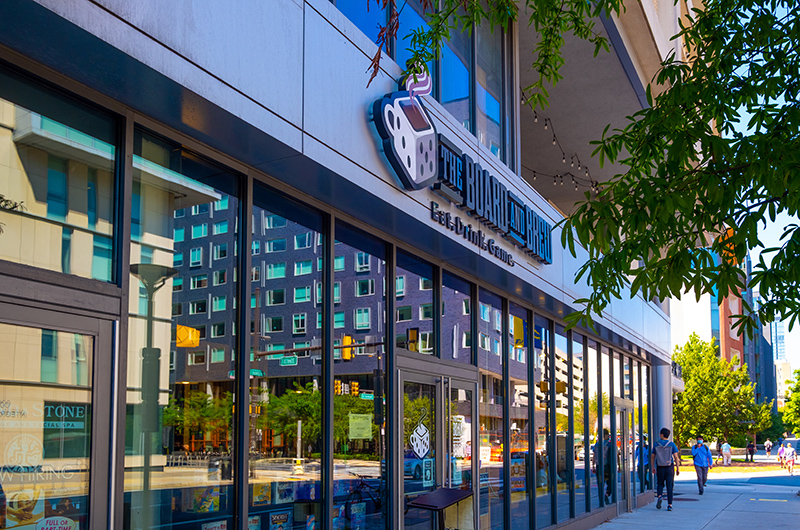 The Board and Brew. Photo credit: Jeff Fusco. 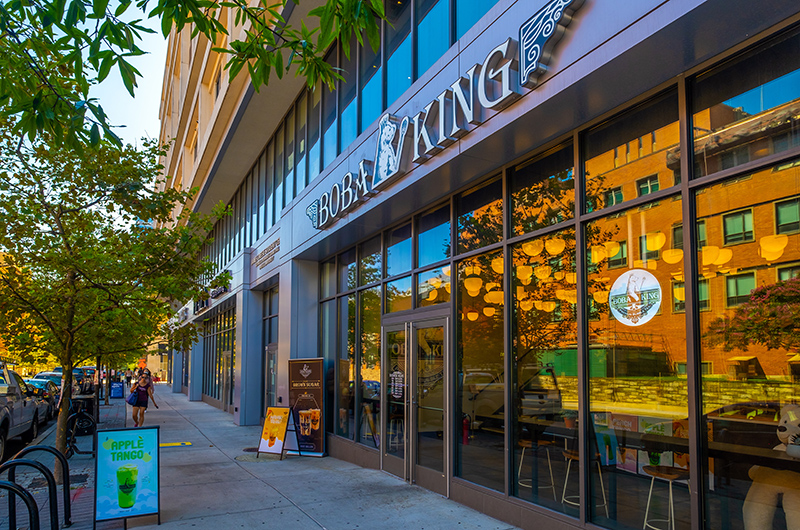 Some old favorites along Chestnut Street like Wahoo’s Fish Taco, Zavino and Joe Coffee closed down at the start of the pandemic, but new meeting and dining spaces have appeared. Boba King, at 32nd and Chestnut streets below the American Campus Communities’ apartment complex, took over the Joe Coffee space, serving unique milk teas and other sweet treats. The Board and Brew near 33rd Street on Chestnut is a dining and hangout space that offers everything from breakfast to dessert and coffee to cocktails. Plus, as the name suggests, they have an astounding, full game library.

This third-floor sunroom on the Chestnut Street side of Stratton Hall was cleaned out during the spring and reorganized into the Stratton Greenhouse last May. It originally housed a greenhouse as far back as the ’70s and was later used for research and academic purposes, but the space had fallen into disuse in recent years. 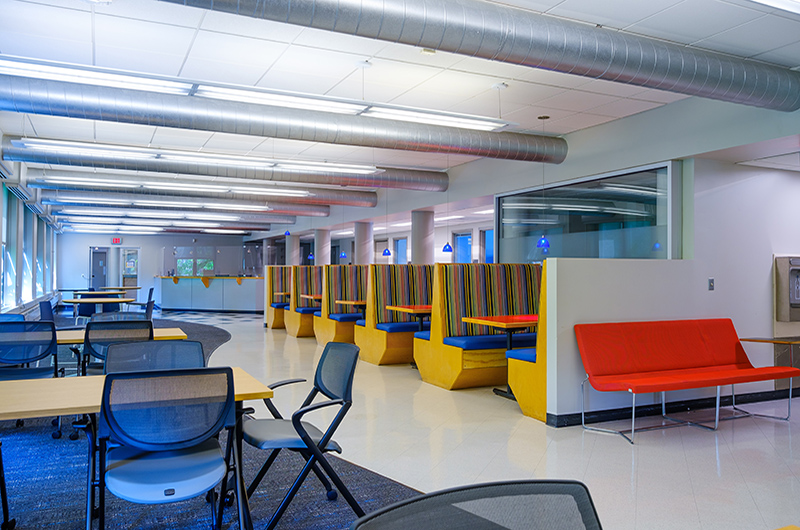 A new Center for Black Culture inside the Rush Building

In the wake of the George Floyd protests in the summer of 2020, Drexel renewed its commitment to equity and inclusion. The new Center for Black Culture is one visible sign of that commitment. The students’ cultural and social hub opened on the first floor of the Rush Building with renovations and new furnishings to two lounges and a library space. It officially launched in November 2020 and the space opened for use this fall. Artwork from local Black artists will be on display in the center throughout fall term. 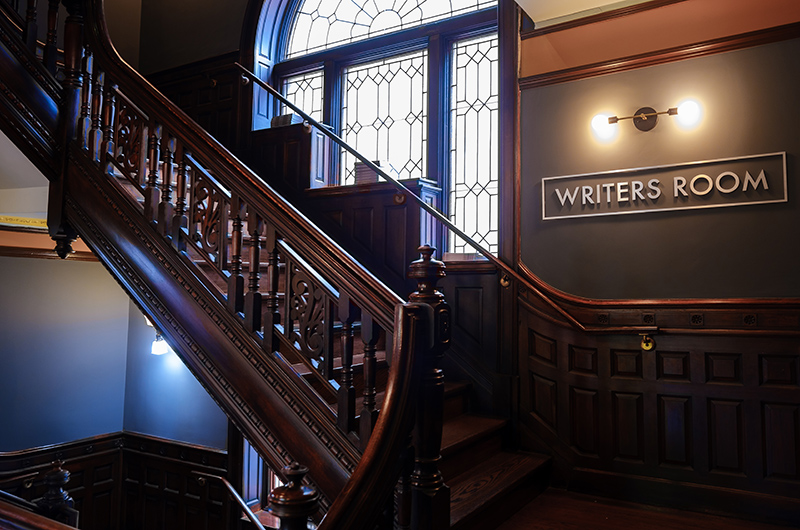 The Writers Room relocated over the summer to the upper floors of Ross Commons. Photo credit: Jeff Fusco.

Relocation of the Writers Room to Ross Commons 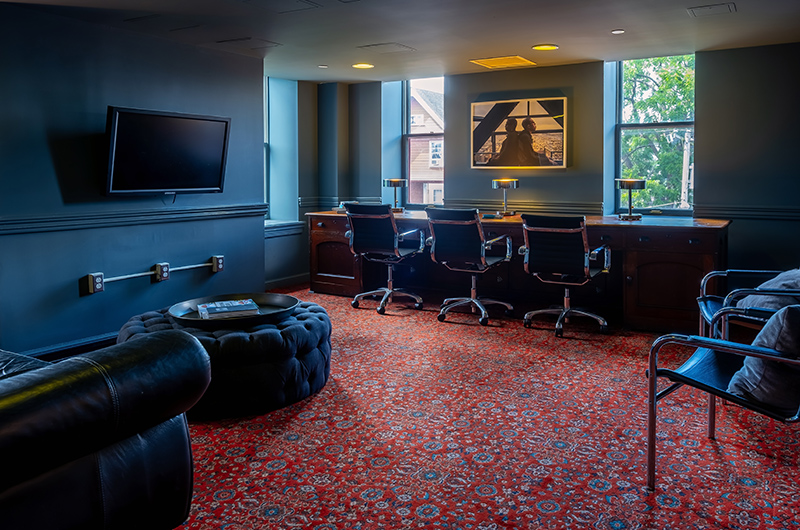 The Writers Room has completed its relocation into charming Victorian rooms on the third and fourth floors of Ross Commons at 227 N. 34th Street (also home to Sabrina’s Café). The move has allowed the community-engaged literary arts program exponentially more space than their former home in MacAlister Hall, and offers an ideal location between the residential part of campus and the larger West Philadelphia community it serves. The new space includes lounge and seminar rooms, studio and study space, and plenty of old-school vibes with historic furnishings and architectural accents dating back to 1888, when the house was first built for a railroad tycoon and his family. 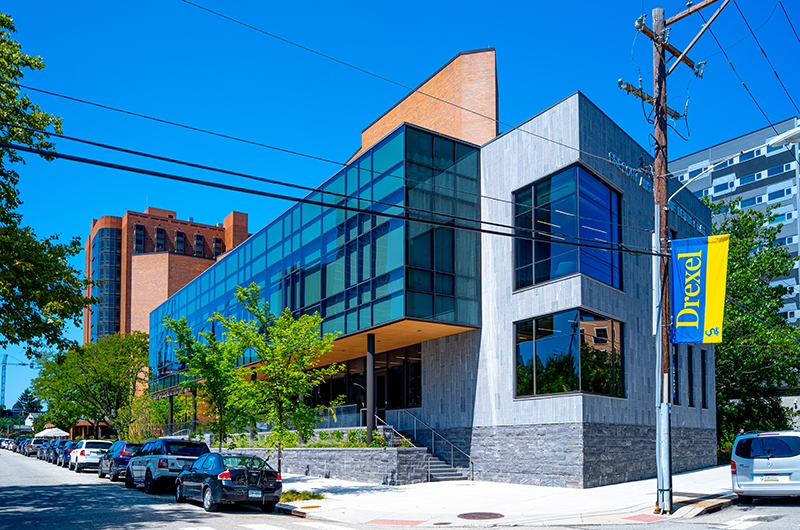 Bentley Hall was renovated in 2019; in 2020, an addition for the Pennoni Honors College was completed. Photo credit: Jeff Fusco.

A new home for Pennoni Honors College at Bentley Hall

Though Bentley Hall (formerly Calhoun Hall) is no new entity on campus, the recently renovated residence hall is now also the home of the Pennoni Honors College. In August 2020, Pennoni offices relocated into a two-story, glass-and-stone, 11,000-square-foot addition at the corner of 33rd and Arch streets. Amenities include a porch, a living room with a fireplace, lounge and office space, seminar and conference rooms and more. 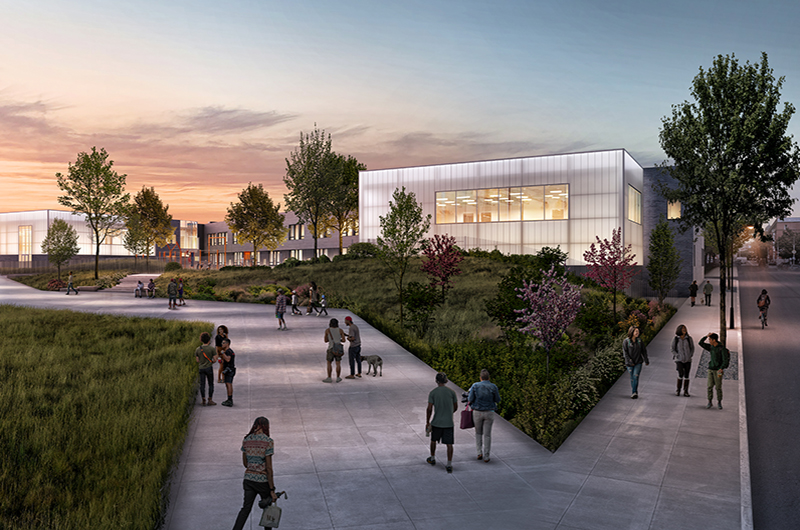 Despite a required construction halt during the early days of the pandemic, construction on the first stages of a 14-acre uCity Square development at 36th and Warren streets has progressed rapidly. The first building completed within the master plan, pictured here, was finished last year. It will educate a future generation of Drexel students, as the new home of two local public schools: Samuel Powel Elementary School and the Science Leadership Academy Middle School. The building began serving K-8 students last spring, though COVID delayed an official opening ceremony. The $40 million building, paid for by funds raised by Drexel from public and private sources, was developed in partnership with Baltimore-based Wexford Science & Technology to ease congestion at Powel Elementary and create a permanent home for SLA-MS, which had been operating temporarily at other locations in University City.

An academic tower for health sciences in uCity Square 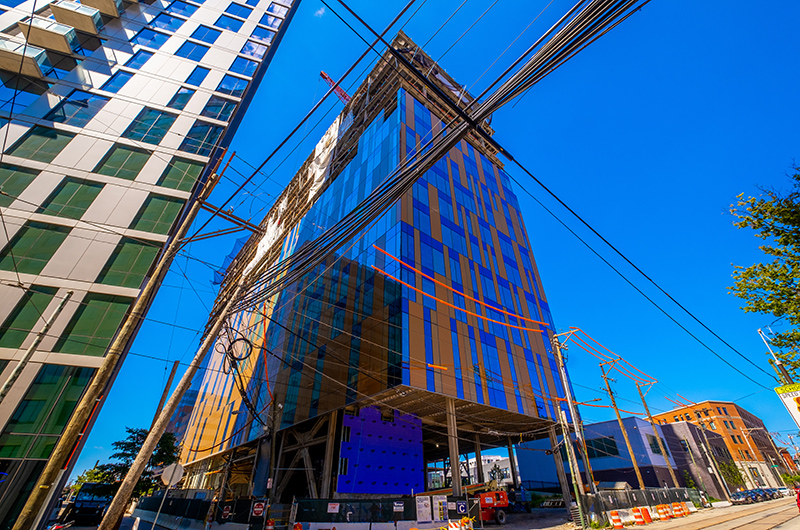 Construction of the Health Sciences Building, as of September 2021. Photo credit: Jeff Fusco.

Next door to the new K-8 school building, Wexford is also raising the Drexel University Health Sciences Building, an academic tower that will house Drexel’s College of Nursing and Health Professions and various academic and administrative functions of the College of Medicine, which are currently located in Center City and East Falls. The building will total about 460,000 rentable square feet, within which Drexel will have an approximate 29-year lease. It is expected to be substantially complete by the middle of 2022. 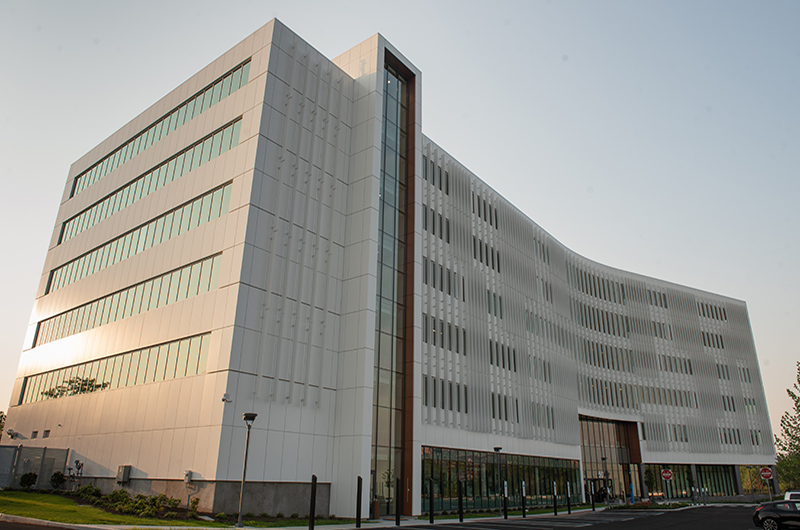 In West Reading, a new instructional facility for med students 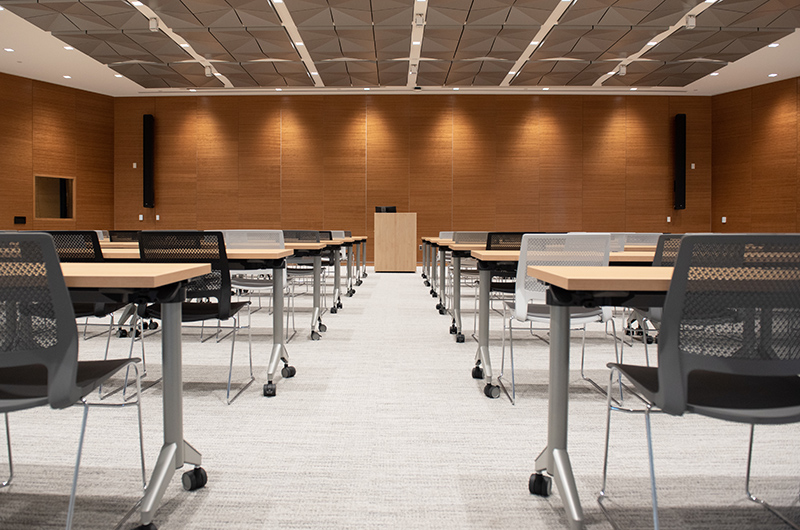 A classroom at the Drexel University College of Medicine at Tower Health. Photo credit: Lauren Little.

Meanwhile, in West Reading, Pennsylvania, the Drexel University College of Medicine at Tower Health, within walking distance to Reading Hospital, officially opened its location on July 28, with 40 first-year medical students beginning their education on campus the month after. The program includes state-of-the-art medical education technology in its lecture halls and classrooms: the first floor contains bioskills and anatomy laboratories for students to practice and hone their skills, and the upper floor contains a Simulation Laboratory for students to practice diagnostic and interpersonal communication techniques in simulated hospital settings. To enhance student wellness and encourage collaboration, the campus also features a fitness center, library resources, lounges and café space.