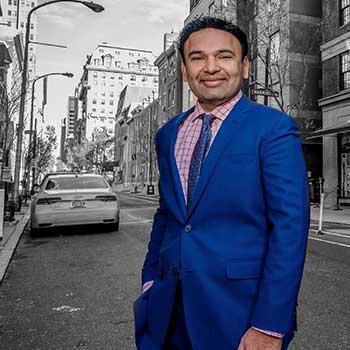 With the fabulous renovation of Parker Spruce Hotel in Center City, Mihir Wankalawa is a step closer to becoming a household name in Philadelphia’s hotel scene.

Mihir Wankawala grew up in a hotel. When he moved to the United States from his native India, he lived with his family at the small inn they operated in New Jersey.

“I learned the business in the evenings and on the weekends,” he says. “I would help out at the front desk, in housekeeping, wherever they needed me. So I started in the business when I was 11 years old.”

Twenty-eight years later he’s still ensconced in the industry, but in a much different capacity. As CEO of The Wankawala Organization, he oversees the 14 hotels that the company owns, operates and manages.

“My passion is skyscrapers and high end, like Four Seasons or Ritz-Carlton,” he says. “That’s my ultimate goal, but you have to start from the bottom and work your way up. That’s pretty much what I’m doing.”

Wankawala, 39, worked as an accountant for Verizon after he graduated from Drexel in 2002 with a bachelor’s degree in business administration. He managed to save around $80,000, and in 2005 he bought his first property: a one-story, 100-room Roadway Inn off the highway in Carlisle, Pennsylvania.

The change I’d most like to see in the world is…
“for every child to get a strong educational foundation so they can fulfill their dreams.”

“You’re very nervous,” he says of those early days. “It’s your first venture, you’re over-leveraged, and you don’t know if it’s going to work out or not.”

Spoiler alert: it did. Wankawala bought his second property in 2007, and now the company — which includes his father, whom he says has been critical to his success — boasts more than 1,600 beds. He made a splash by transforming Philadelphia’s rundown Parker Spruce Hotel at 13th and Spruce streets in Washington Square West into a stylish Marriott property.

“Visitors might be forgiven for doing a double-take upon entering the lobby, for this hotel is a major departure for the Fairfield Inn brand,” Philadelphia magazine wrote in a 2018 article. “Hotels at this level usually are not known for their design or their personality. But this place has it in spades.”

While the financing and real estate aspects of the business are complicated, Wankawala says, the fundamentals of running a successful hotel are not.

“Treat your guests the way you want to be treated. Treat them as your family. Make them feel this is their second home,” he says. “At the end of the day, people care about the service and the way you make them feel when they are there. You can be old, but as long as you’re clean, you’re comfortable, and your service is there they’ll come back to you.”

In May 2020 he’s set to open a Cambria Suites in Ocean City, Maryland, and he’s also in the process of converting the Beury Building, a 14-story property at 3701 N. Broad St. on the Temple University Medical Campus, into a Marriott.

“We are getting bigger and bigger,” Wankawala says. “Someday I want to be the king of hotels in the city of Philadelphia. You think of restaurants, you think of Stephen Starr, but you can’t name anybody in the hotel space. I’d like to be that person, someday.” — Mike Unger