Posted in Departments, Fall 2020, Letters to the Editor 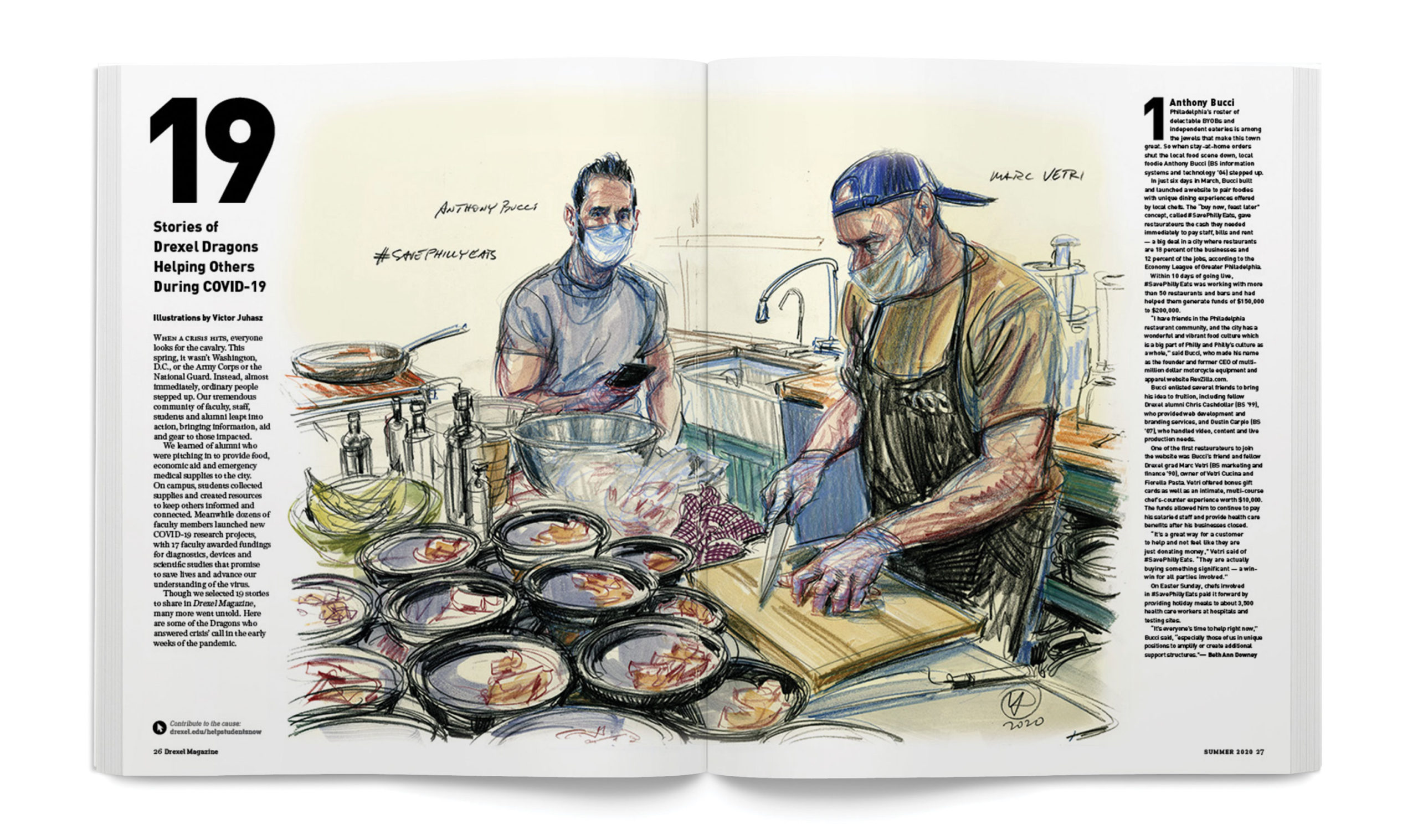 Just finished reading the Summer 2020 edition. It presented the hope and promise of a great university, starting with the article that showed adaptability at the start of the pandemic; Drexel supporting Harold Naidoff ’53 falsely accused of being disloyal; former Eagles player Jon Dorenbos; the campus Spider-Man; 19 stories of Dragons helping others during COVID-19; David Shulkin, MD, working to serve veterans; Nigerian immigrant and Drexel faculty member Rita Adeniran making a difference around diversity and inclusion, and others.

“Dance like no one is watching,” wrote Assistant Clinical Professsor Dawn Morningstar. Well, this issue provided the music for my soul to dance with song and music provided by great Drexel students, faculty and alumni. Thank you.

I always enjoy reading Drexel Magazine, but the latest issue has made me so proud to be a Dragon. The 19 Dragons helping others literally brought me to tears (count me as No. 20 as I sew and donate masks). I didn’t know anything about [former Secretary of the Department of Veterans Affairs] David Shulkin, MD, but I just put his book on my reading list. And the Philadelphia Teacher Residency program? Amazing.

As a third-generation alumna, married to an alumnus, and maybe raising two future Dragons, I could not be more proud of Drexel. Thank you for some bright news during a difficult summer. Good work!

Just a short note to compliment Drexel Magazine on its “excellent look” (and of course, content). From the front cover, through the various articles, to the back cover, the magazine is very appealing, colorful, easy to read, classy format, and it speaks well for Drexel University.

I attended Drexel Institute of Technology as a business student from 1956 -1960. My goodness, the Drexel campus was so different then. The newest building at that time was the science building (since replaced) and I remember the cornerstone as “1957.” I lived in a fraternity house on Powelton Avenue, and … was privileged to have a column in the Drexel Triangle.

It is easy to criticize when something is wrong, but it is very important and rewarding to express praise and commendation when the job is done very well.

The cover of the latest issue is beautiful! The selected format and presentation fully reflects the massive incompleteness of the current situation.

I was especially pleased to see the choice of monochrome — just before I entered Drexel, in ’61, Philly’s Chief of Police and soon-tobe- Mayor Frank Rizzo intentionally changed the colors of the flashing lights on the Police Department’s cars from red to blue, recognizing that red lights evoke feelings of fear and opposition, and that blue lights would have a more calming effect on those stopped by police. This was a safety measure for the Police Department, back in the late ’50s or early ’60s. It worked, well enough for police departments across the country to adopt the idea. I decry the loss of his image overlooking South Philadelphia!

I really look forward to receiving the issues! There have been many, many changes since I helped dedicate the Drexel Activities Center (the DAC) at 32nd and Chestnut streets!

My father’s grandparents arrived from Ireland in 1849 and 1852 aboard “famine ships” and settled in the coal regions of Northeastern Pennsylvania. My father, at age 27, was a third-generation coal miner when he entered the U.S. Army in 1918 and sailed to Europe aboard a troop ship.

The Centers for Disease Control and Prevention believes the pandemic first started at Camp Funston in Fort Riley, Kansas, in April 1918 and was spread to Europe by our troops. The CDC estimates fatalities in the United States were 675,000, and at least 50 million worldwide.

My father returned by troop ship after Armistice and was discharged December 1918. The only time I saw him cry was when he described to me fellow soldiers dying of the flu. More U.S. soldiers died from the flu than on the battlefield in France.

My father’s seven sisters and five brothers survived the pandemic, including one brother who was wounded by poison gas on the battlefield in France.

While skimming through the Summer 2020 edition, I recognized the picture of the now-renovated and renamed Bentley Hall, which was “known to older alumni by its previous names Calhoun Hall or Kling Dorm.”

For its first two years, I served as a resident assistant at Calhoun Hall and was honored to speak at its dedication ceremony in October 1972. It’s been over 50 years since I began my Drexel experience. I had applied to Drexel Institute of Technology, but in 1970, I was among the first class to enroll under its new name, Drexel University. It also was the last year for Drexel football. The annual tuition was around $1,400. There were just two dormitories, Kelly Hall for men and Van Rensselaer for women. Though I grew up in the Philly suburbs in Broomall, I moved in and lived on campus at this “commuter” school.

Drexel and Kelly Hall provided me the opportunity to meet and befriend so many people [who became] lifelong friends. We have played football (at Belmont Plateau, at Burke Lake Park in Virginia and recently at the Outer Banks in North Carolina) every year on the weekend before Thanksgiving. Brothers, friends, children and even grandchildren have participated in this fall classic. Yes, we’re grayer, older, slower and not as tough as before but we wouldn’t miss it, as our families have come to realize.

2020 marks the 50th year for Tech Football and the pandemic presents a new challenge. How do you call plays on Zoom? How do you go to the bar after the game? But we’re Drexel graduates; we’ll figure it out.

Correction: A story about Bentley Hall on page 11 of the summer 2020 edition contained information that was out of date. The story should have said that Pennoni Honors College relocated to the building in April. Pennoni now occupies a new, two-story glass and stone addition of about 10,800 square feet at Bentley Hall.