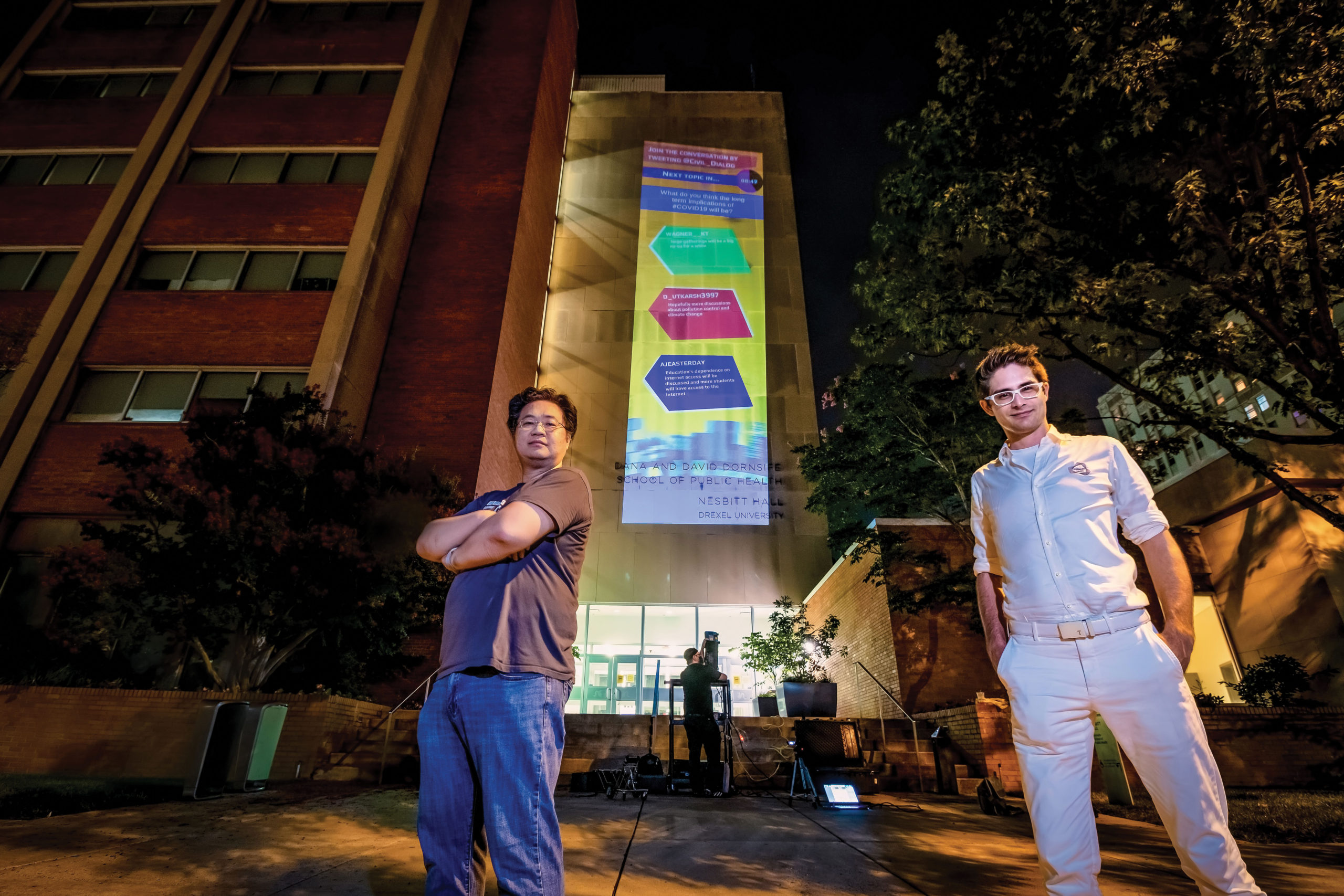 Social distancing has sharply curtailed our ability to speak together, yet rarely have there been so many urgent social issues to discuss.

Police reform, sexism, racism, COVID-19… these charged topics are all on the table right now. And for four evenings in August, they were also on the wall. From Aug. 12–15, a team of Dragons turned the side of a 7-story academic building on Drexel’s University City campus into a giant scrolling Twitter feed for community discourse.

The interactive art installation, called Civil Dialog, was produced by a team of students and alumni led by Digital Media Professor Frank Lee, who took inspiration from a similar project called Social Graffiti created by Westphal College of Media Arts & Design students. From their @Civil_Dialog Twitter account, the team moderated and selected responses to be projected onto the façade of Drexel’s Nesbitt Hall. The project sought to create a public space that would allow a form of civil discourse for people anywhere in the world.

“We really wanted this to be a chance for people to express thoughts and feelings that have been weighing on them during the pandemic,” says Lee. “It’s important that we all keep talking about these issues in a civil fashion. In many ways this conversation has already been happening, so this event is just one way to remind us that we are all in this together and we need to do our best to listen to and support one another.”

Both the Twitter thread and building display were live streamed on Twitch and Twitter Periscope. Topics for the conversation were seeded by students from Drexel’s Pennoni Honors College.

The project was supported by the John S. and James L. Knight Foundation.

Professor of Digital Media Frank Lee is known for lighting up building fronts with interactive art installations. In 2013, he programmed the exterior LED lighting array of the 29-story Cira Centre to run a gigantic arcade game of Pong, and in 2014 he did it again with the game Tetris. Most recently, he used the building to share new games created by local middle-school students. He is director of Drexel’s Entrepreneurial Game Studio, a startup incubator for game studios that he founded in 2013 to seed a Philadelphia gaming economy.

The animated Twitter feed was projected in high definition above University City on the side of Nesbit Hall at 33rd and Market streets, home to the Dornsife School of Public Health. “We want this to be a space where residents and viewers can develop empathetic views and become co-creators of public space — both virtual and on Drexel’s campus,” says Lee.

Game art and production graduate Tom Sharpe ’16 ran the Twitter feed during the installation. Sharpe is the founder of Gossamer Games, a Philadelphia game studio startup he began while a student in Lee’s Entrepreneurial Game Studio. A number of other Entrepreneurial Game Studio alumni and students from Westphal College also helped to execute the project, including Utkarsh Dwivedi, Kate Wagner, A.J. Easterday, Sarah Roach, Anna Panczner, Isabella Haro-Uchimura and the students of DIGM 591 from winter 2020.