By Mike Unger, Photos by Eric Miller
Posted in From the DAC, Winter/Spring 2019

Working behind the scenes first at the Super Bowl for the Philadelphia Eagles and now for the University of Minnesota’s Golden Gophers, nutritionist Leslee Sholomskas ’16 teaches football players how to eat the perfect balance of calories to perform like champions. 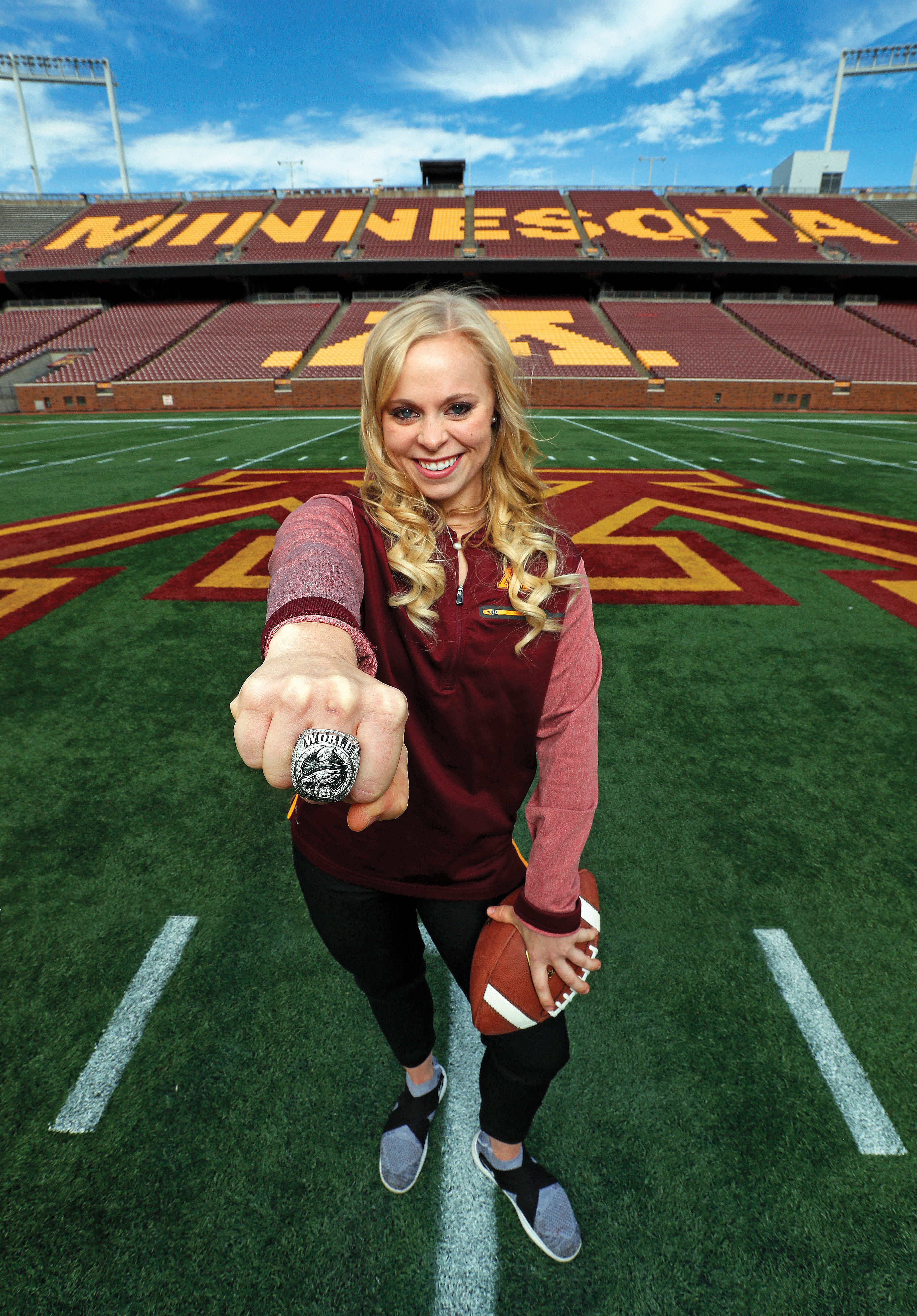 During her year as a sports performance nutrition intern for the Philadelphia Eagles, Leslee Sholomskas says she had her “finger in a lot of different pies.”

To be clear, there were no sweets involved. Hydration products, recovery shakes and protein-rich superfoods: yes. Sugary desserts: no.

“Every player on the team got an individualized recovery shake, which I created based on their preferences and body composition goals,” says Sholomskas, who is a registered dietitian and licensed dietitian with a master’s in science. “I would make them after every single practice or every single lift. I managed the fueling bar, I would do meal and supplement plans, and a lot of player education.”

Sholomskas got her undergraduate degree in biology from Penn State, and thought she wanted to be a doctor. But while she was working at a cancer lab at the University of Pennsylvania, she started spending all her free time in the gym and online researching nutrition to ward off stress.

Sholomskas landed the what-was-supposed-to-be-a-two-week internship with the Eagles in April 2017, but the team asked her to stay on through training camp. When the season started she became the franchise’s first-ever sports performance nutrition intern.

She won’t divulge the specifics of her recovery shake recipes (Cowboys or Giants could be reading this article), but they were generally protein-based concoctions with additional supplements.

“There was fruit in there for the antioxidants, protein to help rebuild muscle, and if they needed to gain weight we’d add elements like peanut butter and oats to give them extra calories,” she says. “Each guy was completely different. I felt like I was the ‘Rain Man’ of shakes — by the end of the season I knew Lane Johnson wants this, or this guy is having a tough week so I need to add more calories to his.”

Whatever she brewed, it worked. The Eagles, of course, tore through the NFL en route to the Super Bowl. When the team traveled to Minneapolis for the big game, Sholomskas went with them. Philadelphia’s Super Bowl headquarters were at the University of Minnesota, and the school’s director of sports nutrition, John Parenti II, took note of Sholomskas’ attention to detail and organization.

“She just had the ‘it’ factor,” he says. So after the Super Bowl, he hired her to be an assistant director for the Golden Gophers.

“Her demeanor, personality and vision of what she wanted to do, specifically for our football team and nutrition department, aligned with what we are trying to accomplish,” he says.

But there was still one game remaining in her Eagles career. Sholomskas was on the sideline before the game, and she watched from the stands as the team won their first Super Bowl. It was a dream come true for a Philadelphia native and lifelong Eagles fan.

“All my most successful athletes on the team had firm plans, routines and habits that they followed, and nutrition was always a part of those plans,” she says. “They know that nutrition has to be a priority in their lives to perform at such an elite level, so they’re very good about listening to what I had to say.”

So when the final whistle sounded and confetti fell from the rafters of U.S. Bank Stadium, did she allow the players to eat anything they wanted?

“We had quite an after party, so I’ll say yes,” she laughs. 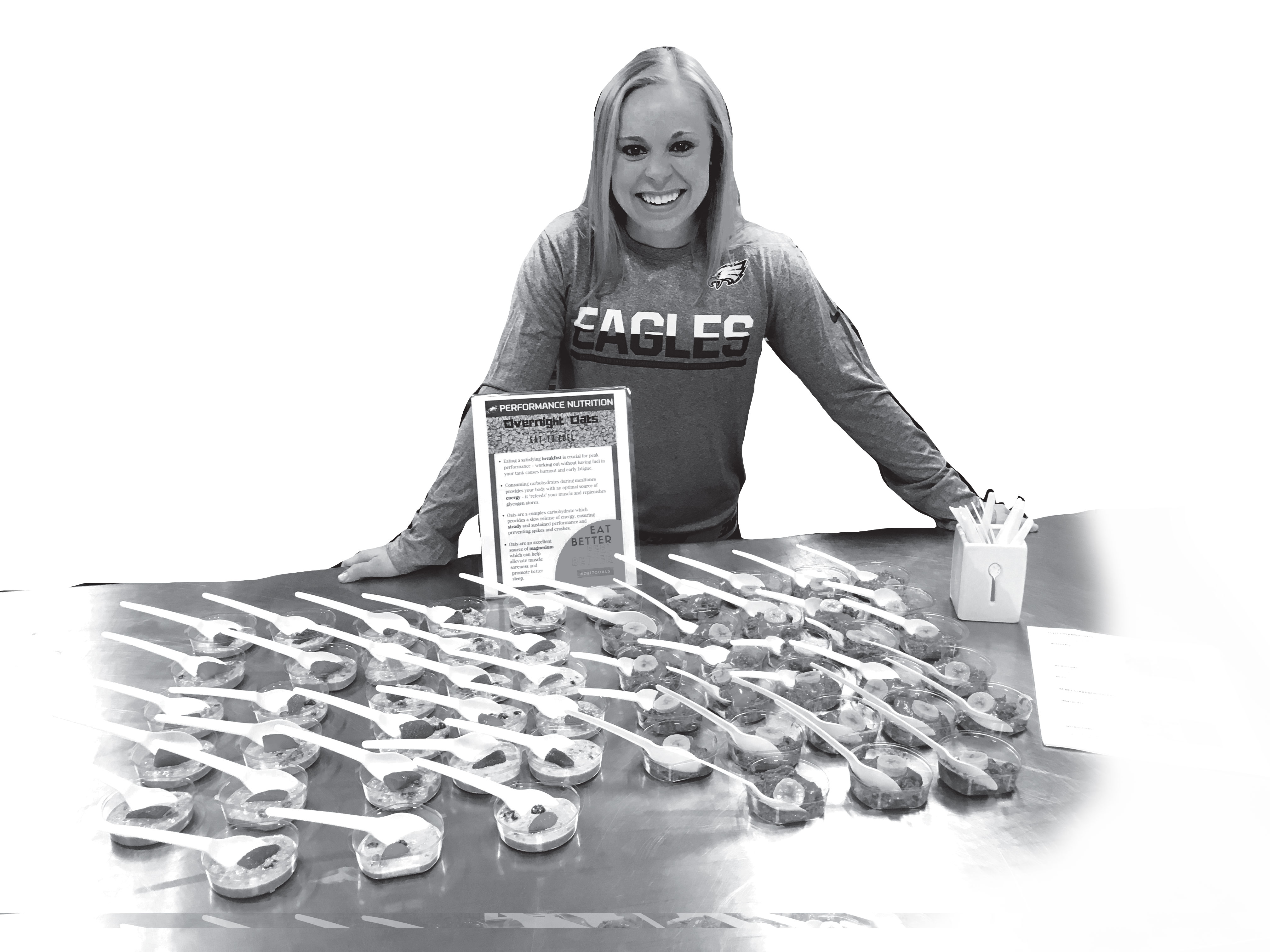 “I realized my real passion was more for how food affects the body …. and Drexel had the only master’s program in Pennsylvania that counted toward a registered dietitian credential. So it was Drexel or bust for me.” — Leslee Sholomskas