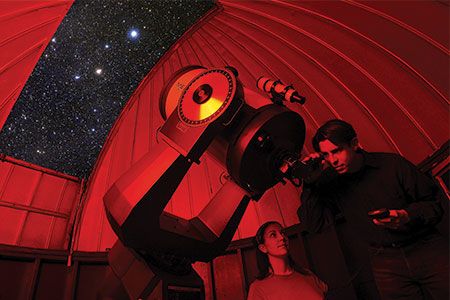 A large white dome on the roof of Curtis Hall holds one of Drexel’s true hidden treasures: the Joseph R. Lynch Observatory, home to the most powerful telescope in the city.

The observatory’s origin story begins in the ’60s, when Drexel hired assistant physics professor Leonard D. Cohen to jumpstart the nuclear engineering program. Cohen had a personal side interest in astronomy and oversaw the opening of the observatory in the ’70s. He continued to advise astronomy-themed student organizations until he retired in the ’90s.

Stargazing apparently wasn’t widely popular at Drexel. Michael H. Tunick ’77, an assistant clinical professor in the Department for Food & Hospitality Management who was vice president of the student-run Drexel Astronomy Society at the time, recalls there was such disinterest in the observatory that his small group jokingly called it “Mount Apathy.”

Today, the Department of Physics in the College of Arts and Sciences uses the observatory’s 16-inch Meade Schmidt-Cassegrain telescope in two classes.

The observatory is also open to the public once a month to connect laypeople with astronomy.

Also, in keeping with Cohen’s original spirit of bringing the study of the stars down to earth, the department’s graduate students host a monthly astronomy night for the public at the Dornsife Center for Neighborhood Partnerships in the Powelton Village neighborhood. 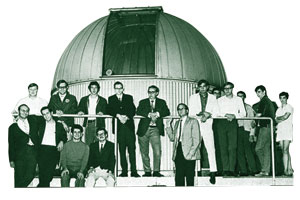 Did you know Curtis Hall is home to the largest telescope in the city?