The next time you visit campus, take a walking tour of Drexel’s outdoor art collection. 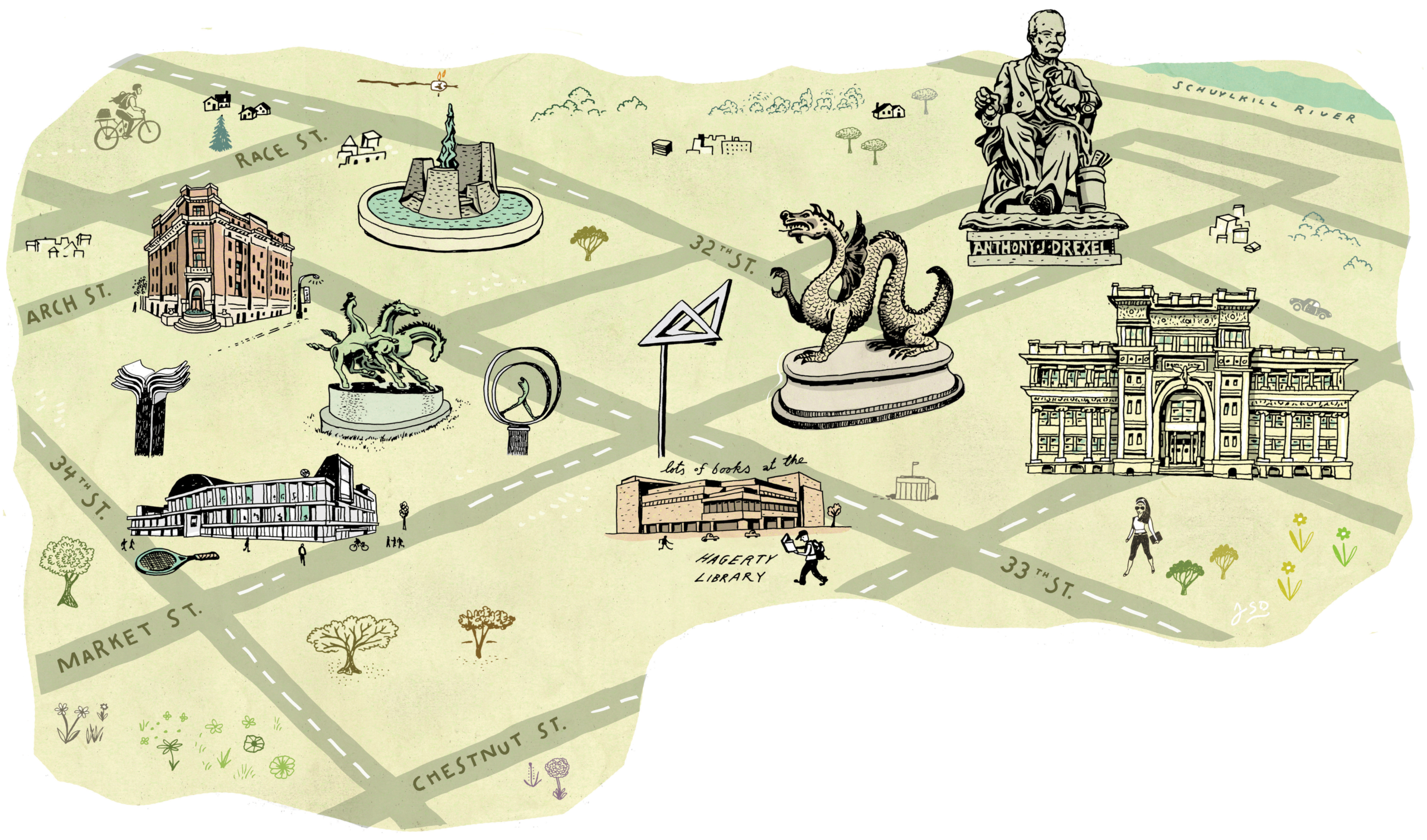 “Running Free” was purchased by the University to fulfill a “1 percent” clause imposed by the Philadelphia Redevelopment Authority that requires developers to allocate a portion of their construction budget toward public art. The statue was purchased for the 1975 opening of what is today the Daskalakis Athletic Center. Henry Mitchell’s work might be familiar to those who live in Philly — his oeuvre includes the Impala Fountain and statues of a hippo mother and baby at the Philadelphia Zoo.

Bronze
Location: Outside of North Hall at 3200 Race St.

This statue is thought by some to be the original “Drexel Shaft,” which is a piece of campus lore you have to Google to appreciate. It may or may not be. What we do know is that it was located in the Korman Quad until moving to the entrance of North Hall in 1999.

The statue of the University’s founder was paid for by his business partner, John Harjes, who oversaw the Paris branch of the Drexel & Co. bank. If you look close, you’ll see little details, like that the founder’s chair is on top of a rug beside a basket of papers, one of which is clearly labeled “plans.” This statue originally sat in Fairmount Park; in 1966 it was relocated to campus for the 75th anniversary of the then-Drexel Institute of Technology.

The “Drexel Book” was created to honor Doris Zimmerman, MS ’70, who was once described by then-Drexel President William W. Hagerty as “a delightful and lively person and a most effective trustee of the University.” The statue stands in front of the waterfall in the courtyard of the Rush Building, which Zimmerman had been involved with when the space was being renovated.

It can be hard to see this sculpture, located on the roof of Hagerty Library. But once you spot it, admire how the two triangles move with the wind. George Rickey was very well known for his kinetic and geometric steel sculptures, and his work is also in the Metropolitan Museum of Art, the National Gallery of Art and the Tate Gallery. This artwork is just one of several important “triangles” at Drexel, like the triangle in the official University seal and the name of the student newspaper, The Triangle. It was acquired through the generostiy of Edwin Fay ’42, ’54 and Elizabeth Fay.

Of course, the best spot to have a sculpture featuring a figure in motion is outside of an athletic center! “Momentum” was created by Michael Speller, a British sculptor who is an expert in bronze, and donated to Drexel by the Earle I. Mack Foundation.

Philadelphia artist Eric Berg got the commission to sculpt this by pitching the idea to then-Drexel President Constantine Papadakis 40 years ago. He thought a dragon statue was just something the University should have, and he spent three years creating it. If you look at the dragon’s armpits you can see initials Berg carved of people in the administration who were helpful in getting the project approved, including “CP,” believed to refer to Papadakis. Berg still has a studio in West Philadelphia and drives past his sculpture routinely.