The individual who manages fundraising for Hillary Clinton for all of Pennsylvania was just a student volunteer at a Democratic debate rehearsal a few years ago. 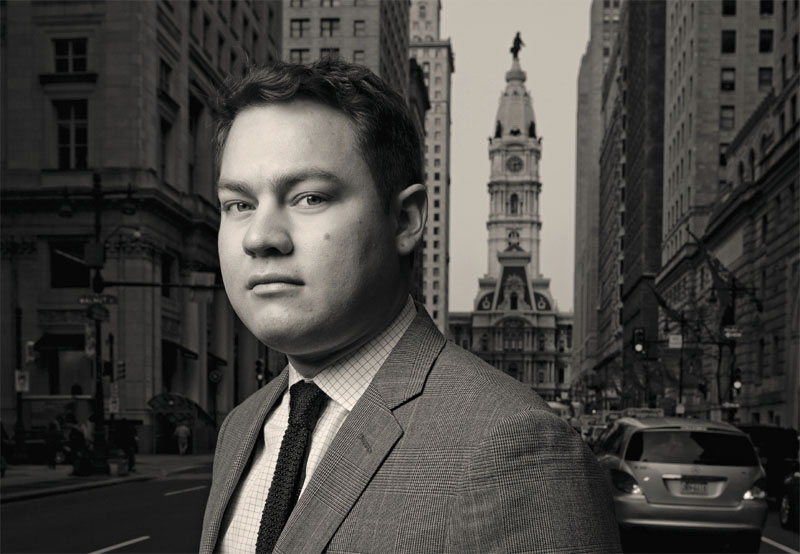 Giancarlo Stefanoni ’12 has a résumé linked to some of the biggest political names in town.

He’s worked for them all, assisting on the campaigns of two U.S. Senate seats, two gubernatorial runs, and a state attorney general’s office. It’s all the more impressive because this political science grad is just 27, and just four years out of school.

Fourteen months ago, he moved into the big leagues when he was handpicked to be the Pennsylvania finance director for Hillary Clinton’s presidential campaign.

The job makes him the sole individual responsible for all statewide fundraising, and puts him directly on the team that stands a good chance of winning the highest office in the country.

He owes it, he says, to Drexel.

“To say that my time at Drexel is the reason I’m where I am today is an understatement,” says Stefanoni.

He didn’t set out to be the go-to guy in Pennsylvania Democratic politics. He just always wanted to be behind the scenes of something big.

Starting out, the New Jersey native saw himself working for a record label or artists in the music business, so he headed to Drexel to study arts and entertainment management.

But his freshman year happened to coincide with the run-up to the 2008 presidential election, and when Drexel was chosen as the venue for an October 2007 Democratic debate, a friend of his invited him to volunteer to help out.

Stefanoni ended up assisting with minor but key tasks like helping the sound crew with microphone checks at the candidates’ podiums. Though it was grunt work, something about the process appealed to him.

Politics hadn’t exactly run in his family, but it hadn’t been absent, either. His grandfather  had served as a city councilman in Burlington, New Jersey, for 21 years, but had left office a few years before Stefanoni was born.

“All of the interest I’d had [in politics] before that came from him,” he says. “Politics was present, but it wasn’t a force.”

That was about to change. His interest piqued, Stefanoni switched his major to political science and volunteered with Clinton’s 2008 campaign the following spring. He worked as a driver in the candidate’s motorcade, crisscrossing the commonwealth leading up to the April primary. When it was over, Stefanoni knew he wanted more.

The Drexel Co-op Program gave him the chance to get the additional campaign experience he sought while earning credit toward his degree. Through contacts he made working for Clinton, he got in touch with people on the campaign of then-Sen. Barack Obama, who went on to win that year. Stefanoni and a friend from that campaign then joined the 2010 U.S. Senate campaign of former National Constitution Center CEO Joseph M. Torsella, which became Stefanoni’s first co-op.

“They were a small campaign and needed help, and they liked that I could do lots of hours,” Stefanoni says.

Unfortunately, that campaign was cut short by Republican U.S. Sen. Arlen Specter’s announcement that he was switching to the Democratic Party, losing Torsella much of his initial support.

But the connections developed working for Torsella would carry him forward yet again, first to the office of then-Gov. Ed Rendell, to help with fundraising, and eventually to the corporate side of politics with Philadelphia-based Comcast Corp.

Michelle Singer, who’d met Stefanoni while working with Torsella and Rendell, was at this point Comcast’s executive director of political affairs and recruited him to work for her during his second co-op.

“He’s an incredibly quick study and has an innate political sense and ability to work in a corporate environment,” she says. “He’s got a lot of hustle. He’s a cool customer and doesn’t take himself too seriously. And no job is too small. No matter how far you get you have to be willing to roll up your sleeves and stuff envelopes, and he has a really great attitude. He doesn’t ever get put off or ruffled.”

In 2011, his third co-op took him back to a run for Senate, this time split between the reelection campaign of Democratic U.S. Sen. Robert Casey Jr. and six weeks in Casey’s legislative office on Capitol Hill.

PLENTY OF TIME TO REHEARSE

“If you’re in a four-year school, you might have a summer or an afternoon one day a week, but you don’t have considerable time to devote to getting experience as you do with a co-op,” says Giancarlo Stefanoni.

“You get to devote significant time to furthering your career and figuring out exactly what you want to do.”

By this point, Stefanoni says, he was looking at working with campaigns as his eventual career.

“I’d definitely seen the most fundraising in my co-ops, and I think I was leaning toward that rather than press and communications,” he says. “Even when I’d done my legislative internship on the Hill, I wasn’t drawn as much to legislative and policy work as I was to campaigns.”

Stefanoni graduated from Drexel in June 2012 and immediately put his substantial co-op experience to work with Kathleen Kane’s campaign for Pennsylvania attorney general. There, he was given more responsibility than he’d ever held.

“It was a totally positive experience to feel like I had ownership over things and working with the candidate,” he says. The fact that it was an historic win for Kane as the first female attorney general and the first Democrat to take the office since it had been up for election was particularly special.

From Kane’s campaign, he joined Katie McGinty in her bid to become Pennsylvania’s governor.

McGinty is running this year for U.S. Senate without Stefanoni’s assistance, but is effusive in her praise for the work he’s done for her in the past.

“Giancarlo’s ambition is not a self-serving one. He’s high-energy on account of some vitally important issues and causes and needs in this country,” she says, noting that though his title with her campaign was finance director, he stepped in to do everything from driving to scheduling. “He works as hard or harder than anyone I know and does so with a smile and no complaints.”

Though McGinty lost in the primaries to Tom Wolf, Stefanoni was able to parlay his experience into a job with the Wolf campaign as senior deputy finance director, the No. 2 person on the finance team. After Wolf ’s election, he stayed around to help with fundraising, right up until he joined Clinton’s camp.

Now, not even out of his 20s, Stefanoni can count among his colleagues and co-workers a broad swath of the most powerful figures in state and national politics.

“That definitely is kind of the reality, that I do know and have relationships with people who hold statewide office,” he reflects. “It’s strange especially when you’re not working, because even then your work life very much stretches into your personal life.”

While some people have assumed that he must have gotten his start in politics through family connections, Stefanoni prides himself on making his own way.

“Plenty of others don’t come from a political family and are like me — they’ve dedicated themselves and found themselves in positions where they’re just trying to do good work,” he says.

Should Clinton take the Democratic nomination and move on to the White House, there’s almost no telling where Stefanoni could go.

Through it all, that moment when he volunteered for the debate hosted at Drexel and Clinton’s 2008 campaign remains a defining moment that he suggests was unique to Drexel.

“That’s not something that happens at every school,” he says. “That debate was at Drexel for a reason, and I think part of it was because it has co-op, it’s in the city, it’s cutting edge and it’s focused on things lots of other schools aren’t focused on.”