It can take an inventor years to receive an official U.S. patent, usually represented by a seven-digit number. But the full story behind most patents is much longer. Kapil Dandekar’s idea for a self-configuring wi-fi antenna is one of nearly 300 patents issued to Drexel faculty, and this is the story of how it came to be. 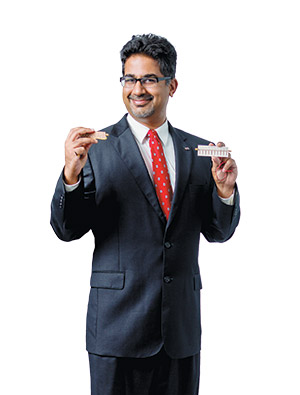 The inspiration for U.S. Pat. No. 8908787 came to Kapil Dandekar in 2002 while he was watching reruns of “Terminator 2,” the 1991 film in which Robert Patrick plays a robotic assassin from the future who can dissolve into liquid metal and recombine in any shape.

“What if you could make an antenna out of that?” thought Dandekar, who teaches electrical and computer engineering in the College of Engineering and heads the Drexel Wireless Systems Laboratory.

Although sci-fi assassin metal is unfortunately unavailable, Dandekar believed it was possible to build an antenna embedded with electronic switches that would enable it to automatically reshape signal beams for optimum transmission — in a size small enough to fit in a laptop.

Such a device would mean no more wireless hotspot dead zones and no more data slowdowns, even on the busiest public bandwidths.

Like most bright ideas, this one bounced around for a few years. Dandekar shopped it to two or three grad students, hoping someone would take up the complex, intricate math as a dissertation topic.

“But it never seemed to click,” he says. “There’s a very significant gap between large-scale vision and actually implementing something.”

Eventually, a graduate student from Italy named Daniele Piazza (one of this year’s 40 Under 40 honorees; see page 39) took up the project — and spent the next 10 years perfecting the technology.

Dandekar says he realized they were on to something about five years ago, when they were testing how machine learning could intelligently adapt the antenna design. After shutting the demo antenna down and starting it back up, the device returned to the best known state of configuration.

“It was actually learning something about where it was and how to optimize its own transmissions,” he says.

In 2010, Dandekar, Piazza and their colleague Michele D’Amico filed a patent for a “reconfigurable wi-fi” antenna. That same year, Piazza launched a company called Adant Technologies Inc. to develop and market the invention to broadband companies.

Dandekar is now one for one: This was his first patent to issue, and it’s already on the market.

“Commercialization wasn’t my initial thought, honestly; I just thought it was cool,” says Dandekar. “Daniele, to his great credit, has entrepreneurial skills. You like to see students latch onto an idea and run with it. And he really ran with it.”