By Katie Clark
Posted in Departments, Summer 2016, From the Collection

The Academy of Natural Sciences of Drexel University has a collection of taxidermy animal specimens — mostly birds — numbering in the thousands. Used as tools for scientific education, these specimens require special care and handling because of one undeniable commonality: They are all wickedly toxic. 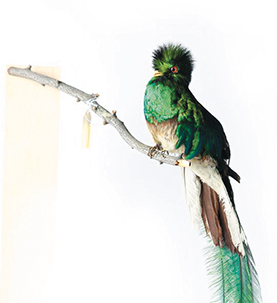 Deep in the shadows of the Academy of Natural Sciences of Drexel University, a collection of animals waits, frozen. Long dead and preserved by taxidermy, they now serve as visual tools to help deliver the Academy’s message about the magic and mystery of natural science. The taxidermy animals look as exquisitely beautiful as they did in life, and that’s thanks to a look-but-definitely-do-not-touch chemical process. 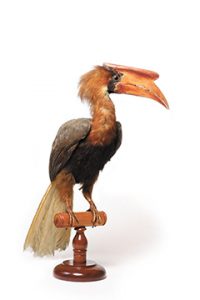 Not much is known about where the animals came from, since none of them have any associated data — where they were collected and when, and by whom — information that makes them more appropriate as display specimens, rather than part of the Academy’s collection of specimens used for scientific study.

What is known — or is at least strongly assumed — about the taxidermy animals is that they are toxic. From the late 1800s to the late 1980s, toxic preservatives like arsenic, mercuric chloride, strychnine, DDT, ethylene oxide and others were used to protect organic natural history and anthropological specimens from infestation and decay.

“The prettier they are, the more toxic they are,” says Jennifer Sontchi, director of exhibits at the Academy, “because that means they weren’t eaten by bugs.” 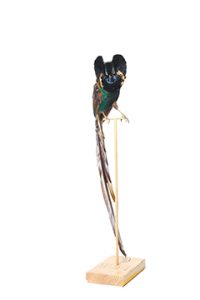 “Taxidermists would essentially make a soap made from a solution of these preservatives and rub it on the inside of the bodies,” she explains. “Then, as time goes by, the heavy metals disintegrate and crystallize, and make their way out of the skin and fall down like a toxic snow onto the mounts or the bases.”

Exhibits staff wear personal protective gear like Tyvek suits, masks and gloves whenever working with the specimens. “We treat it as if we were working with asbestos,” Sontchi says.

The specimens are cleaned thoroughly before going on display and placed in cases with protective glass. About two dozen of the collection’s bird specimens are now on display in the Rincliffe Gallery in the Main Building. To prepare for the exhibit, Assistant Director for The Drexel Collection Lynn Clouser, along with three graduate students, underwent a special workshop led by Sontchi to learn about the dangers as well as proper cleaning and handling of the birds. 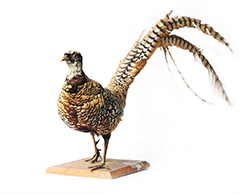 The birds in Frozen in Flight: Taxidermy Birds from the Academy of Natural Sciences, Drexel University, will be on display through August 22.

“While working with the birds, the students and I wore Tyvek jumpsuits, masks and nitrile gloves,” says Clouser. “We used a HEPA filter vacuum to prep the birds before placing them in the cases, and in the art storage area, they were separated from the other collection pieces. We also kept the storage room door closed during the birds’ stay at Drexel to reduce any contamination to the office areas.”