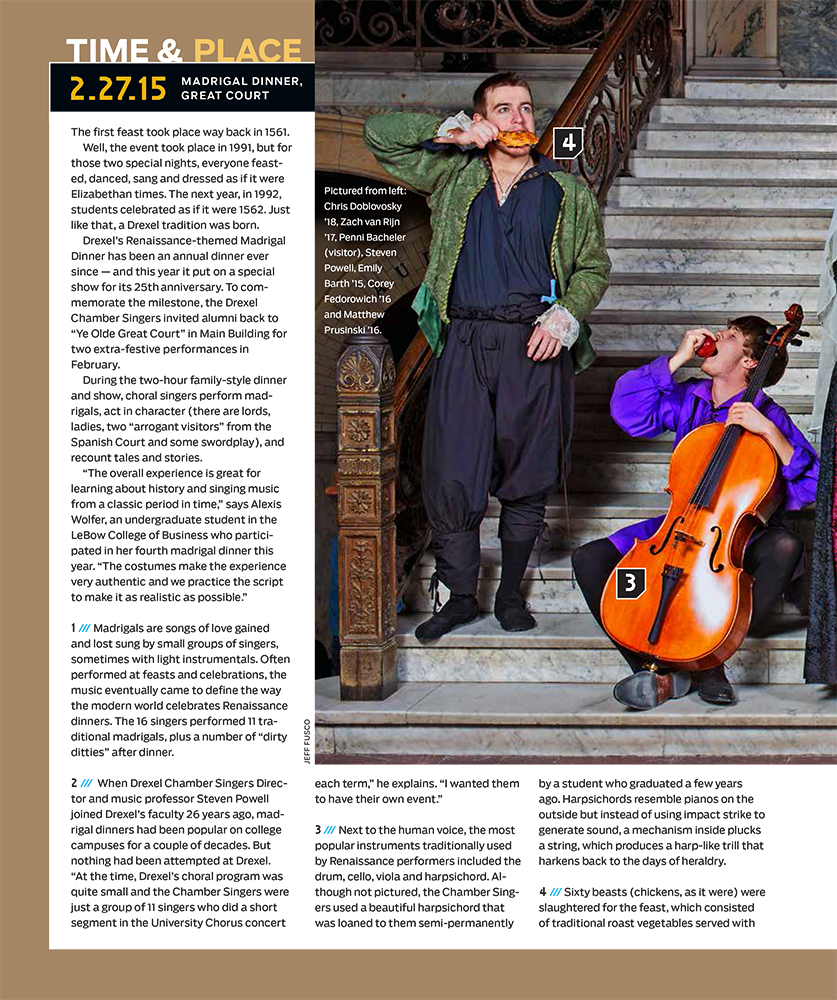 The first feast took place way back in 1561.

Well, the event took place in 1991, but for those two special nights, everyone feasted, danced, sang and dressed as if it were Elizabethan times. The next year, in 1992, students celebrated as if it were 1562. Just like that, a Drexel tradition was born.

Drexel’s Renaissance-themed Madrigal Dinner has been an annual dinner ever since — and this year it put on a special show for its 25th anniversary. To commemorate the milestone, the Drexel Chamber Singers invited alumni back to “Ye Olde Great Court” in Main Building for two extra-festive performances in February.

During the two-hour family-style dinner and show, choral singers perform madrigals, act in character (there are lords, ladies, two “arrogant visitors” from the Spanish Court and some swordplay), and recount tales and stories.

“The overall experience is great for learning about history and singing music from a classic period in time,” says Alexis Wolfer, an undergraduate student in the LeBow College of Business who participated in her fourth madrigal dinner this year. “The costumes make the experience very authentic and we practice the script to make it as realistic as possible.” 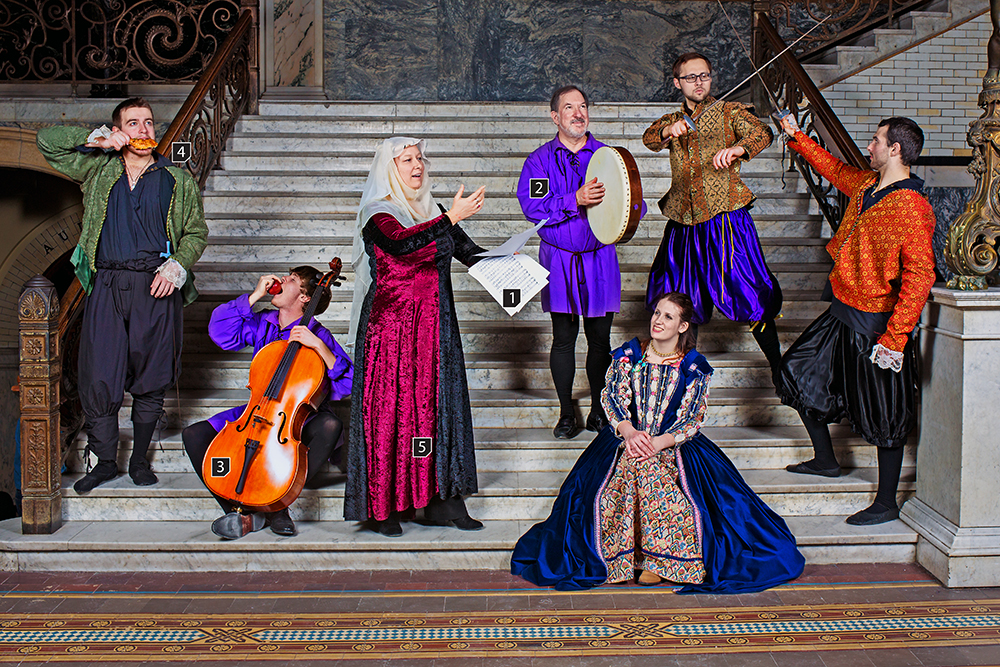 1 /// Madrigals are songs of love gained and lost sung by small groups of singers, sometimes with light instrumentals. Often performed at feasts and celebrations, the music eventually came to define the way the modern world celebrates Renaissance dinners. The 16 singers performed 11 traditional madrigals, plus a number of “dirty ditties” after dinner.

2 /// When Drexel Chamber Singers Director and music professor Steven Powell joined Drexel’s faculty 26 years ago, madrigal dinners had been popular on college campuses for a couple of decades. But nothing had been attempted at Drexel. “At the time, Drexel’s choral program was quite small and the Chamber Singers were just a group of 11 singers who did a short segment in the University Chorus concert each term,” he explains. “I wanted them to have their own event.”

3 /// Next to the human voice, the most popular instruments traditionally used by Renaissance performers included the drum, cello, viola and harpsichord. Although not pictured, the Chamber Singers used a beautiful harpsichord that was loaned to them semi-permanently by a student who graduated a few years ago. Harpsichords resemble pianos on the outside but instead of using impact strike to generate sound, a mechanism inside plucks a string, which produces a harp-like trill that harkens back to the days of heraldry.

4 /// Sixty beasts (chickens, as it were) were slaughtered for the feast, which consisted of traditional roast vegetables served with roast capon and salmon, a bisque-like potage Jacqueline, and warm apple tart for dessert — all heavy with historically accurate amounts of butterfat and christened with an opening toast of wassail (which was non-alcoholic — definitely not very historically accurate). The dining is convivial around long, shared tables. “It would have been a very social event and that’s the feel of the dinner, for it to be about meeting and eating and listening to beautiful music, and talking about Queen Elizabeth,” says Hannah Rechtschaffen, a graduate assistant in the Department of Performing Arts.

5 /// Audience participation is a big part of the fun. In real life, this courtly chanteuse Penni Bacheler is a software developer for ReminderMedia in King of Prussia. She came with 20 members of the local chapter of the Society for Creative Anachronism, a “living history” group where she holds the position of seneschal (analogous to president). “The harmonies were fantastic; I get chills listening to them,” says Bacheler, who sang with her chamber choir in college. “Madrigals have a certain sound that’s familiar and inspiring at the same time.”