It can take an inventor years to receive an official U.S. patent, usually represented by a seven-digit number. But the full story behind most patents is much longer. Wan Shih’s patent for the iBreastExam is one of nearly 300 issued to Drexel faculty, and this is how it came to be. 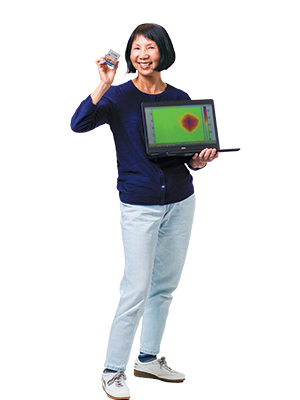 Wan Shih has to pause and think for a bit to tally up all of her patents. Over a quarter century as a researcher at Drexel — where she has teaching appointments in the School of Biomedical Engineering, Science and Health Systems and in the College of Engineering — she’s accumulated 30 patents, and has another 21 pending.

And while she loves all of her creations, one has gone farther than the rest down the long road toward commercialization.

U.S. Pat. No. 7497133 describes a device that promises women here and in the developing world a safe, affordable and precise way of detecting breast tumors — with no harmful X-rays.

The device uses subtle piezoelectric (electrical charges in response to pressure) measurements to detect abnormal elasticity in human tissue where tumors are developing. It can detect tiny early tumors, even in dense breasts.

The iBreastExam won FDA approval in March and a company is now looking to manufacture it in India.

Shih is herself a breast cancer survivor, but if you think that’s how she got the idea for this device, you’d be wrong. In 2008, she was diagnosed with aggressive ductal carcinoma and underwent surgery and radiation.

By then, she’d already been developing the device for about eight years. Ironically, the inspiration for her potentially life-saving idea came while she was doing research for the military.

In the late 1990s, Shih was investigating piezoelectricity to create lightweight actuators and sensors for soldiers’ gear. When a fellow researcher challenged her to think about piezoelectricity’s possibilities in human medicine, she began developing a hand-held tumor detector. Then, during a Drexel Research Day in the early 2000s, she happened to be presenting alongside a researcher focused on breast cancer. She saw her neighbor’s poster — and the piezoelectric bulb, so to speak, went on.

* The iBreastExam is a small handheld sensor that detects changes in breast tissue elasticty, as shown on a laptop.