4.2.14 Fossil Prep Lab at the Academy of Natural Sciences 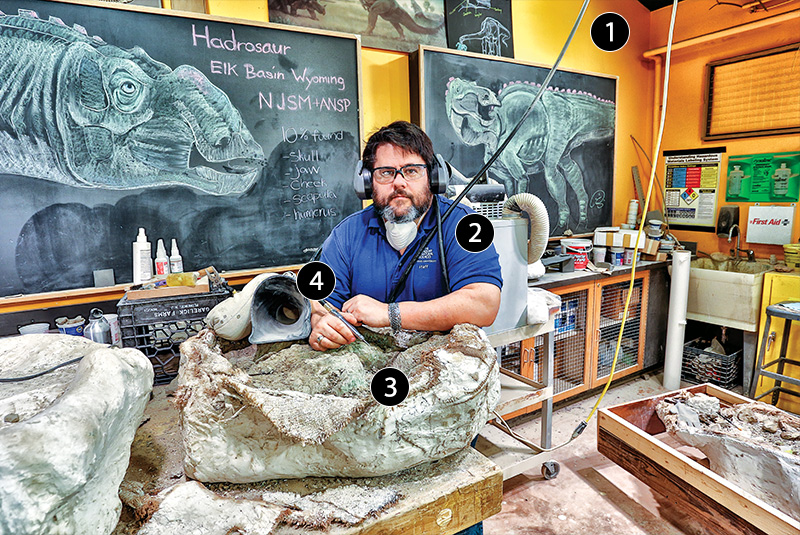 Activity in the Fossil Prep lab at the Academy of Natural Sciences of Drexel University plays out like a pre-historic soap opera. Lab technicians are literally digging for clues — as they free a fossil from its protective plaster “field jacket,” details emerge about how that particular dinosaur lived, and how it may have died. The whole drama unfolds in full public view.

Currently, staff in the prep lab are unearthing a set of T. rex fossils from blocks of sandstone that recently arrived from elk Basin, Wyo., a dig site that New Jersey state Museum paleontologists have been exploring for more than 50 years. Through an ongoing partnership between the Academy and the museum, the job of preparing the fossils collected there occurs in the Academy’s Fossil Prep Lab.

Led by Fossil Prep Lab Coordinator Jason Poole, a team of skilled Academy staff and volunteers will work for the next several months to carefully remove the T. rex fossils from the plaster jackets and then from the many layers of hard sandstone that encase them. eventually, these fossils will be added to the research collection at the new Jersey State Museum.

Fossils prepared in the lab come from dig sites around the world. Often, the lab workers don’t know exactly what they’re going to uncover. “That’s what’s so neat about it,” says Poole. “There are always surprises that we didn’t expect.”

1.The Lab: The Academy’s Fossil Prep Lab opened in 1998 and is part of the museum’s permanent Dinosaur Hall exhibit. Poole says most visitors are amazed to learn that the fossils on display in Dinosaur Hall represent less than 1 percent of the Academy’s collection.

2. The Coordinator: Jason Poole has been an educator and seasoned field crew manager at the Academy for nearly 20 years. His is a business of collaboration — he’s often teamed up with other paleontologists who are interested in educating the public about our ancient past. Recent projects have positioned him alongside Drexel Associate Professor Ken Lacovara: Their team unearthed Paralititan, a new type of titanic dinosaur, during an expedition to Egypt in 2000 and,in 2004, they were part of a crew that discovered a 66-million-year- old, super-massive dinosaur fossil in Patagonia, Argentina. The fossils from both of these expeditions were prepared in the Academy’s lab.

3. The T. rex: This fossil is roughly 67 million years old. So far, technicians have freed a claw. Badly mashed by time, the fossil had to be painstakingly pieced back together. Lab workers are also preparing fossils from an edmontosaur (duck-billed dinosaur) and an ankylosaur (spiny-covered dinosaur with a club-tail), both collected from Elk Basin.

4. The Tools: Poole and other skilled workers in the lab use a number of tools to gingerly free the fossils from their “tombs,” including an airscribe (like an engraving device), dental picks and hobby knives.