Sights Set on the Ice

By Mike Unger, Photos by Tommy Leonardi
Posted in Features, From the DAC, Summer 2019

With an experienced bench, a growing roster and the players’ best season yet under their belts, the men’s ice hockey club team is on track to achieve its goals. 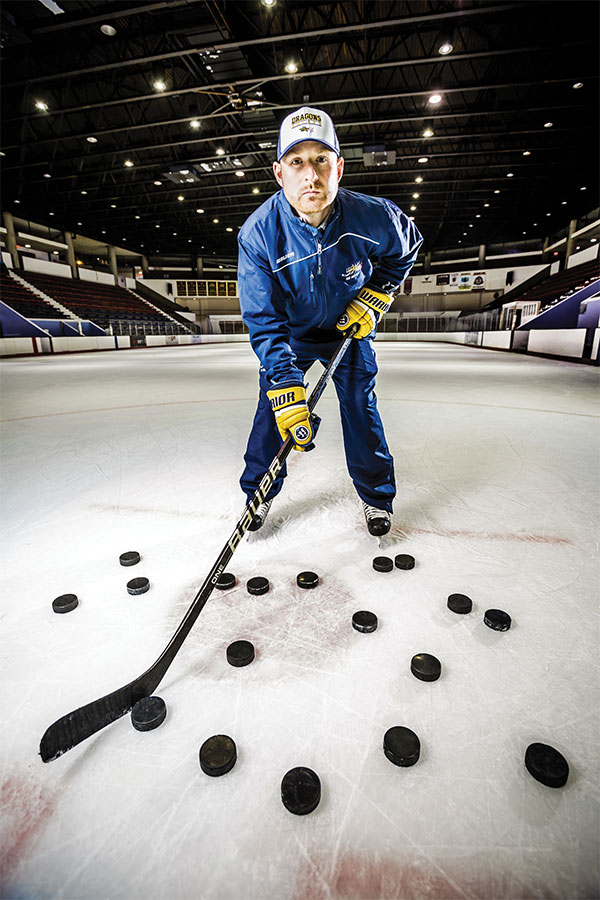 Sights Set on the Ice

That’s how excruciatingly close Drexel’s men’s ice hockey club team came to having a chance to achieve its own goal: winning a game in the American Collegiate Hockey Association (ACHA) tournament. Even though the season fell short, 2019 will go down as one of the most memorable seasons in the program’s history, reaching a 30-5-2 record that is the program’s best to date.

“This was hands-down our best year,” says Coach Kyle Zoldy ’13 (pictured at right), who’s been a club member since first lacing up his skates for Drexel in 2008. “We had a very seasoned leadership core. The coaching staff has now been around six years together. A lot of the players that we’ve recruited have been here for quite some time and understand what we expect from them in terms of effort and the Xs and Os side of things.”

Among the team’s accomplishments on the ice: winning its third-straight conference regular season title, earning the 18 seed at the ACHA postseason tournament in Dallas, and finishing the year with a national ranking of 24.

Yet perhaps the program’s most telling move forward was the establishment of a second team, which competed in the ACHA’s Division II.

“We went from having 30 hockey players on campus to having close to 60,” Zoldy says. “Now the guys on the top team understand that there’s a hungry group on the second team that are really fighting for their spots.”

Club hockey in the ACHA’s Division I is highly competitive. Although there are no scholarships, players are recruited and often transfer in from NCAA Division III programs.

“It’s not a club where people are showing up thinking, maybe I’ll try it out,” says Lucas Fraiman ’20, a defenseman and the club’s president. “People are in contact with the coaches, they’re known beforehand and they’ve been playing the sport for years.”

In fact, the last two programs to join the NCAA’s Division I — Penn State and Arizona State — previously competed in the ACHA.

Club hockey players must commit much of their time to the sport. Practices are on Tuesdays and Wednesdays at 6 a.m. and Thursdays at 9 p.m. Weekends usually mean two, or sometimes three, games. Road trips can mean long bus rides.

“Hockey is a sport that we’ve all played since a very young age,” Fraiman says. “It’s what we all love to do. In some ways you can’t imagine life without being a part of it.”

Drexel’s club, which has been around since the late 1970s, has never advanced out of the ACHA tournament’s first round. But it’s qualified for the competition three years in a row, and this season, its 5-4 loss to Oklahoma was its best showing. After falling behind 4-0, Drexel clawed its way back into the game before falling just short.

Next year will tell whether the team achieves its objective, but after coming so close this time, the goal seems nearer than ever.

Support from the Ice Hockey Club’s fans and Drexel alumni makes the team stronger! Show your support by making a gift today!

Make a gift to Ice Hockey