A Change of Scene

Co-op allowed Jeff Martin to take his career choice for a test drive — and change course for something better. 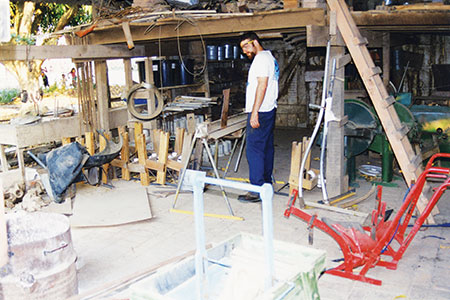 A Change of Scene

A snapshot from a workshop in Bolivia where Jeff Martin spent his co-op.

Jeff Martin’s first co-op as a mechanical engineering major was making screws for computer hardware. It was a good job, and it was not for him.

“I wanted to travel the world and accomplish something substantial,” says the 2003 graduate. So he switched majors to civil engineering and appropriate technologies and combined his last two Drexel co-ops into a year-long placement in Bolivia.

Martin had explored the field of appropriate technologies during a freshman project and saw value in the discipline. “You can’t just drop off high technology in places where there’s no network to support it,” he explains. “You have to look at technologies that match the resources of the local communities.”

In Bolivia, he worked in development with the Mennonite Central Committee. “For the first three months I took intensive language classes, and after that, I was pretty fluent in Spanish,” he says.

At the same time, he was learning to weld and fabricate metal. “I worked at a shop developing intermediate technologies, like animal-drawn implements. For one local farmer, I fabricated a frame for a two-row seed planter that could be drawn by his horses.”

His co-op culminated in a project building rainwater catchment tanks.

“I developed plans for building tanks for a remote indigenous community that had no accessible drinking water,” recalls Martin. “Peoples’ homes had tin roofs, so we had a pretty clean source of water from rain. We mounted gutters to collect rain and then showed them how to build catchment tanks using chicken wire, cement and sand.”

After graduation, Martin built on his co-op experience and started his career as a project engineer for heavy construction company Allan Myers. He says, “At first, I worked on a lot of environmental, water and wastewater treatment projects. Over the years, I’ve used my Spanish language skills with crew members and in the union work that I do.”

Looking back at his time in Bolivia, Martin says, “I learned a lot about the culture there and made a lot of friends. I came back with a very international worldview, which was transformative for me.” —Louisa Wilson