The bright new playground at Morton McMichael School is a true village endeavor — and a bigger accomplishment than it might at first appear. 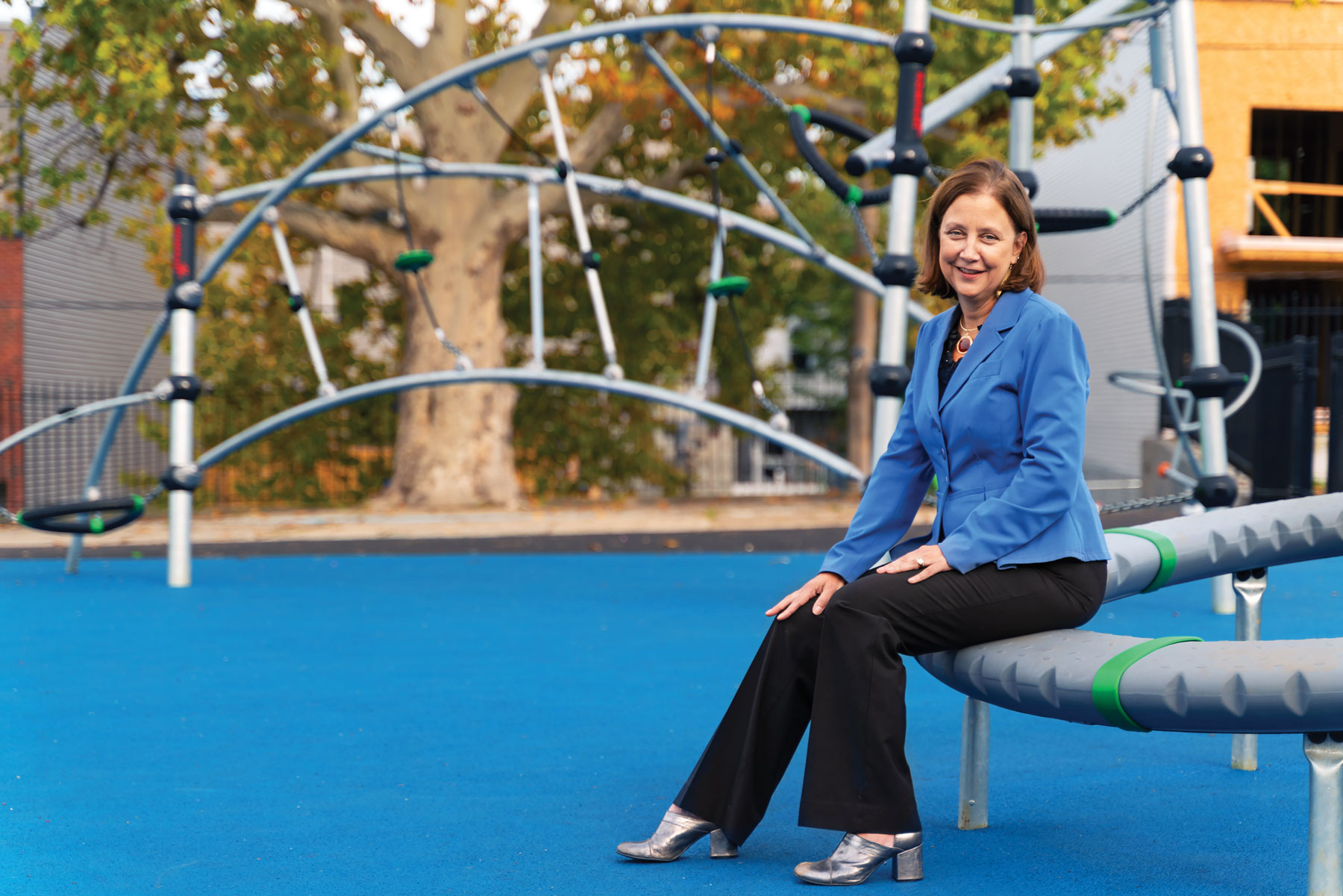 Debra Ruben, associate dean and professor of interior design in the Antoinette Westphal College of Media Arts & Design, brought interior design students and local schoolchildren together to share their vision for a rehabilitated play space at Morton McMichael School.

When Dollette Johns-Smith returned to her school after summer vacation, she saw the first signs that this school year would be different. The cracked concrete that had been the nominal playground at Morton McMichael School for her entire seven-year tenure, as assistant principal and later as principal, was being torn up.

The empty schoolyard would soon be covered by fresh blacktop, filled with contemporary equipment and lined with plants and shade trees that would enliven recess when students returned for the new school year.

And the kids took notice. Each day when she left the building, Johns-Smith saw children outside, eyeing the construction in progress, exuberant about what they were watching.

“Oh my Gosh, Miss Smith,” they yelled. “Did you see they put up some equipment?”

For the children of this K-8 public school in West Philadelphia’s Mantua neighborhood, having a proper jungle gym is a revelation. Ever since a fire destroyed the original play area, whenever kids burst through the doors on the east side of the building for recess, they’ve had to run out onto a barren extension of the school’s parking lot and make up their own games.

And while a playground may seem a modest addition, this project follows a decade of transformations at McMichael, a school that was saved from closure 10 years ago. Thanks to fruitful relationships with Drexel and a burgeoning civic association, the institution has made great strides. All along, renovation of the playground has been a long-running theme — a dream pursued doggedly by caring individuals that finally became reality when the playground was dedicated in August. 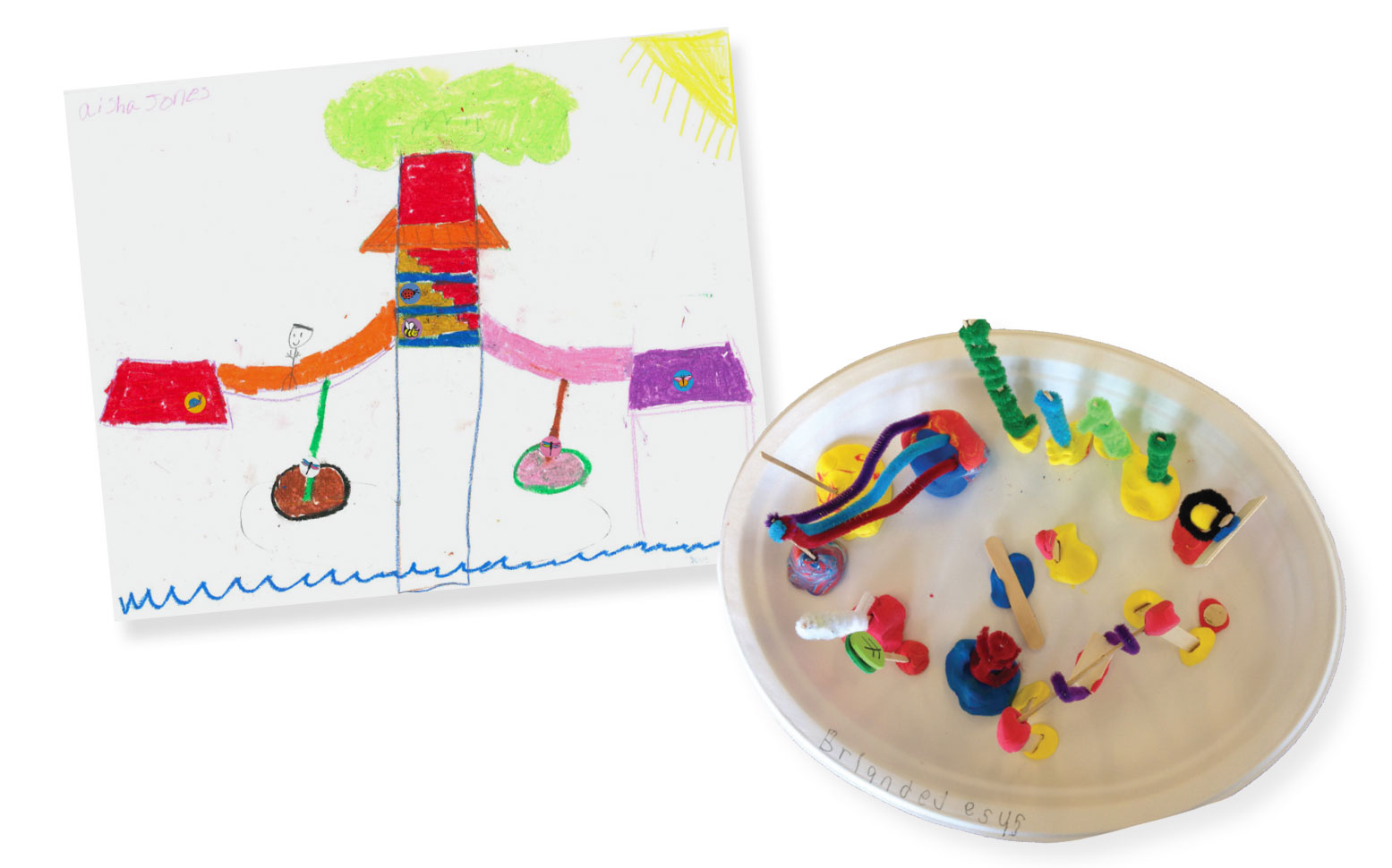 Kid Creators
McMichael children shared their feelings about their community and their school with Drexel educators and graduate students through drawing, clay construction and magnet-making projects. Gradually, discussions with the children evolved into the idea of play. The children created conceptual drawings and models of what they’d like to see on the playground and got a chance to critique the Drexel students on their ideas.

For Debra Ruben, associate dean and professor of interior design in the Antoinette Westphal College of Media Arts & Design, those first installations of playground equipment were the culmination of nearly a decade of devoted planning, preparation and persistence.

She first imagined the playground as the follow-up to a similar project at the Blankenburg Elementary School, at 46th Street and Girard Avenue, where she secured funding for a repaved yard complete with basketball hoops, raised gardens, murals and play equipment. Ruben wanted to bring something similar to McMichael, so in 2012 she garnered the support of then-Principal Brian Wallace, Johns-Smith’s predecessor, and taught a seminar in which Drexel graduate students asked second- through fifth-graders to share ideas about the playground of their dreams.

Ruben also led community-building workshops with McMichael students, teaching them about maps and learning about what mattered most to them in their community to ensure that the new playground would reflect their wants and needs. She invited the students to design their ideal schoolyard in clay — replete with ice cream trucks, a fountain or pool and all the grand visions an 8-year-old might muster.

But progress on the actual playground moved in fits and starts. A retaining wall on the north end of the yard raised concerns about structural safety. Questions about the water management plan led to delays and potential cost increases. Cobalt found beneath the concrete had to be safely removed. Legal conversations slowed things down at every step.

Plans for the space evolved numerous times along the way. Locking in the final funding required not just patience but a great deal of collaboration with the community. The final budget of more than $365,000 was pieced together from contributions and grants secured through Drexel, the Mantua Civic Association, the School District of Philadelphia and the school itself.

Through it all, Ruben stuck with the project and made sure at every step that it reflected the vision of the children and families who would use the playground. The children weren’t satisfied with an empty yard. They told Ruben and her graduate students that they wanted a safe space where they could play without risk of injury, as well as equipment to swing and climb on. And although they appreciated the stately poplar at the east end of the schoolyard, they wanted more shade than it could offer. It will take time for the new plantings put in the ground this fall to grow, but in time the new playground will meet all those needs and more.

Because the playground’s development was hampered by so many obstacles, it doesn’t include everything that Ruben or the students dreamed it might — such as an outdoor classroom and rain garden. But she believes it will encourage everyone involved to keep pushing for more.

“This new playground is a beginning for McMichael, not the completion,” Ruben says. “It is something that I hope will be added to with continued support from the community, teachers, families and Drexel.” 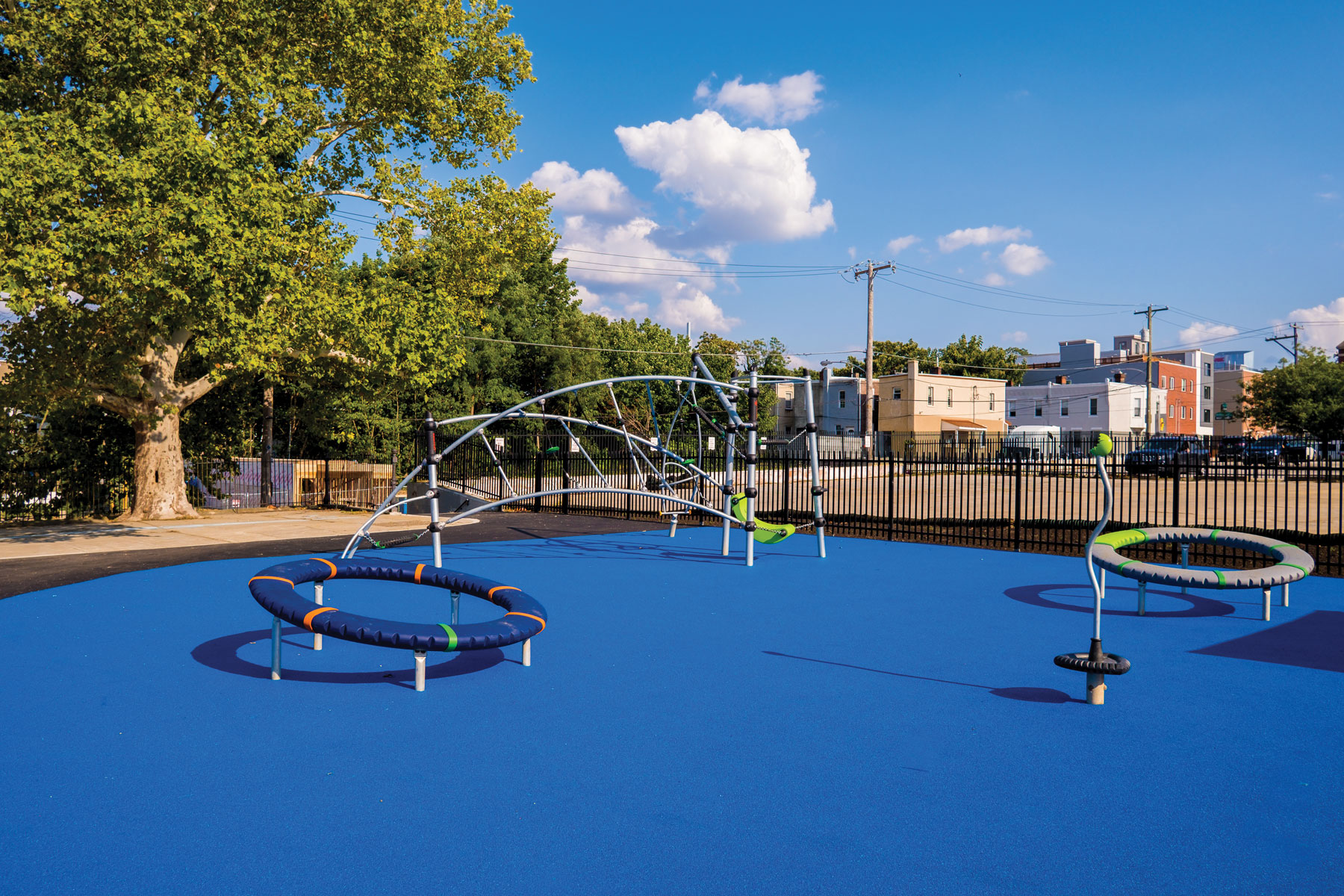 While Ruben worked toward getting McMichael a playground, the school was on a journey of its own. When she took up the project in 2012, McMichael had appeared on a list of buildings the school district planned to close due to dwindling enrollment brought on by changing property values in Mantua and the demolition of Mantua Hall, an 18-story public housing high-rise, in 2008. Fewer than 300 students currently attend McMichael.

Gwendolyn Morris, secretary of the Mantua Civic Association that formed in 2012 to revitalize the neighborhood, says Mantua residents were outraged that their lone school might be eliminated.

Spanning nine grades, McMichael is a place where children truly grow up, and its roots run deep through generations of residents. De’Wayne Drummond, Mantua Civic Association president and a lifelong community resident, went to McMichael and has a grandmother who taught there. He says conversations in Mantua often turn toward classroom memories. Losing the school would have devastated the community, Drummond says.

The school is a hub for the neighborhood, agrees Principal Johns-Smith. “If the community needs something, it starts here with us,” she says. During the pandemic crisis, for example, she was in the building every Friday to ensure families could pick up food.

Drexel began building a relationship with McMichael in 2011 after receiving a $1 million education enrichment grant from PECO. Portions of the grant were divided between McMichael and the Samuel Powel Elementary School in the Powelton Village neighborhood as part of Drexel’s commitment to supporting local education. Assistance has ranged from the routine — grounds work and volunteer clean-ups — to the personal, in the form of math and literacy tutoring and professional development from Drexel’s School of Education.

So when the civic association began to rally the community to save the school, leaders turned to Lucy Kerman. As senior vice provost of Drexel’s university and community partnerships, Kerman has steered several public school transformations in West Philadelphia, including bringing Science Leadership Academy Middle School (SLA-MS) to West Philadelphia and the relocation of SLA-MS and Powel Elementary to a new purpose-built building in Drexel’s uCity Square.

Drexel stepped up with a raft of resources — refurbished computers, faculty expertise, positive behavior plans, library funds — to persuade the school district that McMichael’s climate, culture and performance could improve.

From the beginning, improving recess was a priority.

“Recess is a famous time for either getting good energy out or inspiring bad energy that comes back into the classroom,” says Kerman.

With that in mind, the University helped bring Playworks, a nonprofit that builds children’s social and physical health through play, onto the McMichael grounds. From once being a chaotic part of the day at McMichael, recess became more structured, allowing children to return to class with focus.

But even as the school was rejuvenated and the community poured itself into fortifying its most cherished institution, the schoolyard languished.

Straight A’s for Effort
Persistence paid off for Drexel’s Debra Ruben, Principal Dollette Johns-Smith, and Mantua community leaders Gwen Morris and De’Wayne Drummond, who stuck by the playground project despite delays and obstacles.

Eight years ago, Mural Arts Philadelphia painted a vibrant mural — titled, “Micro to Macro” — around the school’s exterior with vivid images that conjure math, science and the environment. When he looks at the mural, Drummond sees all the potential of McMichael’s students.

Those students have played a significant part in improving the school. Their ideas informed the construction of the new playground. They were part of painting, cleaning and revitalizing the school’s interior at a Martin Luther King Jr. Day event in 2017. Last year, they presented Johns-Smith with a detailed plan to redesign the school’s bathrooms and secured funding to make it happen. She wants to motivate and empower the students, “so that if they think of things they want to see happen within the building, we can talk about it and make it happen,” she says.

Change has come on the academic side as well. With Drexel’s support, the school has brought in Steppingstone Scholars, an organization focused on educational and social mobility that offers after-school programming with an eye toward preparing middle-school students for their next steps.

When Kerman began working with McMichael, the school didn’t have the infrastructure to encourage students to dream big, she says. But under the watchful eyes of its current and past principal, every eighth-grader now thoughtfully fills out the school district’s high school selection form. They receive group informational sessions about high school choice, alongside individual guidance on the importance of high school for their future. Last year, 13% of McMichael’s eighth-grade class were admitted to special-admission schools and 55% were admitted into schools with citywide admission, according to Steppingstone.

“Significant numbers of kids are really thinking about where they want to go to high school, and they’re getting in,” Kerman says. “When we started working with McMichael, that wasn’t the case.”

The playground is a stepping stone in its own way, filling a gap between McMichael’s past and its present.

While digging up the old schoolyard, the construction team uncovered a foundation laid long ago…steel beams and rebar representing some unknown history for this section of Mantua.

Seeing it, Ruben wondered about what might have been there before. It was a reminder that in a city as old as Philadelphia, all progress rests upon earlier efforts.

“My hope is that this continues to create a spark in the kids,” Ruben says. “I hope it jumpstarts them to want to do more and improve the site, through love and care and the games they play out there and how they use the space.”

To Drummond, the playground represents hope for an educational upbringing that tends both to students’ minds and bodies.

Johns-Smith is energized by all of the changes at McMichael. In the playground, which blossomed in the minds of McMichael’s children, she sees a lesson for her students and the families of Mantua.

“When you have a vision, keep at it,” Johns-Smith says. “Eventually, it’ll happen.”