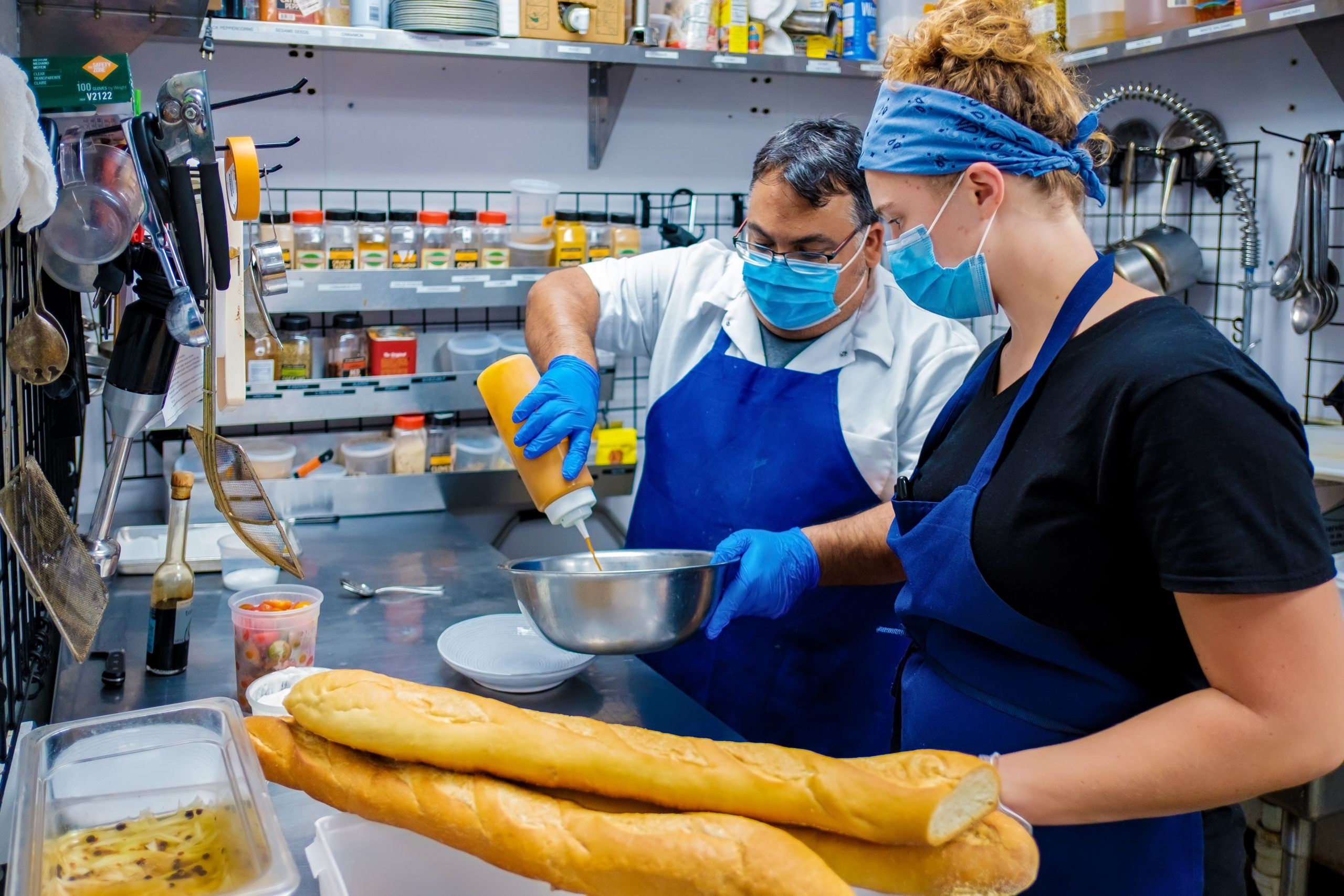 Executive chef Brian Lofink ’03 and fifth-year and co-op student Anna Wilson plate a panzanella salad in the kitchen of terrain’s garden café in Glen Mills, Pennsylvania. For safety during the pandemic, the team recipe development work was done virtually, and the restaurant operated at reduced capacity.

In the hopping, lunchtime kitchen at terrain’s garden café in Glen Mills, Pennsylvania, Drexel University fifth-year and co-op student Anna Wilson, 22, plates a panzanella salad heavy on tomatoes — cherry tomatoes on a bed of crisp arugula, croutons made of green tomatoes coated in breadcrumbs and deep fried, and an oven-dried tomato-basil vinaigrette.

“It’s really exciting,” says Wilson as she arranges ingredients for the special. “You see what started as a simple conversation…comments or ideas from a meeting…come to life on a plate that you’re sending out to guests.”

Her job as line/prep cook is to slice and dice, but her co-op is about culinary innovation, too.

In a creative partnership funded by the private, Plymouth Meeting-based The Claneil Foundation, terrain teamed with Drexel Food Core Lab students to dream up dishes for the café’s new sustainability-focused weekend menu.

In this partnership, the otherwise routine task of concocting delicious dishes takes on a challenging twist: Each three-course menu revolves around a single produce item — tomato, in this case, or corn or melons in the past — with an upcycle goal of using all parts of the plant, including those not typically incorporated into a meal.

“The No. 1 way to reduce food waste is source reduction and full product utilization,” says Jonathan Deutsch, founder and director of Food Lab. The lab, based inside the College of Nursing and Health Professions, promotes sustainability, health and food access through the design of new food products and innovative culinary methods.

Upcycling can lead to culinary heights, Deutsch argues, by opening the door to unusual flavor combinations and experimentation. Watermelon toast, anyone?

“We’re not punishing people with these components,” says Deutsch, who was part of a task force that helped to define “upcycled” food for the Upcycled Food Association last year. “‘You have to eat all your corn.’ We’re saying this is a much more delicious dish.”

The partnership between the Food Lab and the owner of terrain, Philadelphia-based company URBN (founded by Drexel trustee Richard Hayne), is managed by the University’s Drexel Solutions Institute (DSI). Led by Anna Koulas, vice president, and Dr. Rajneesh Suri, vice dean for research and strategic partnerships, DSI is the gateway for companies to connect and collaborate with Drexel University. DSI primarily works with companies by creating talent pipelines, developing and upskilling workforces, and by finding innovative and industry-centric solutions through customized R&D projects which leverage the university’s R1 research capabilities.

DSI’s work not only helps industry partners, it also helps to shape and develop Drexel’s curriculum so that students are best prepared for the workforce of the future. Relationships like this help expand connections beyond co-op, important to Drexel’s future, Suri says. 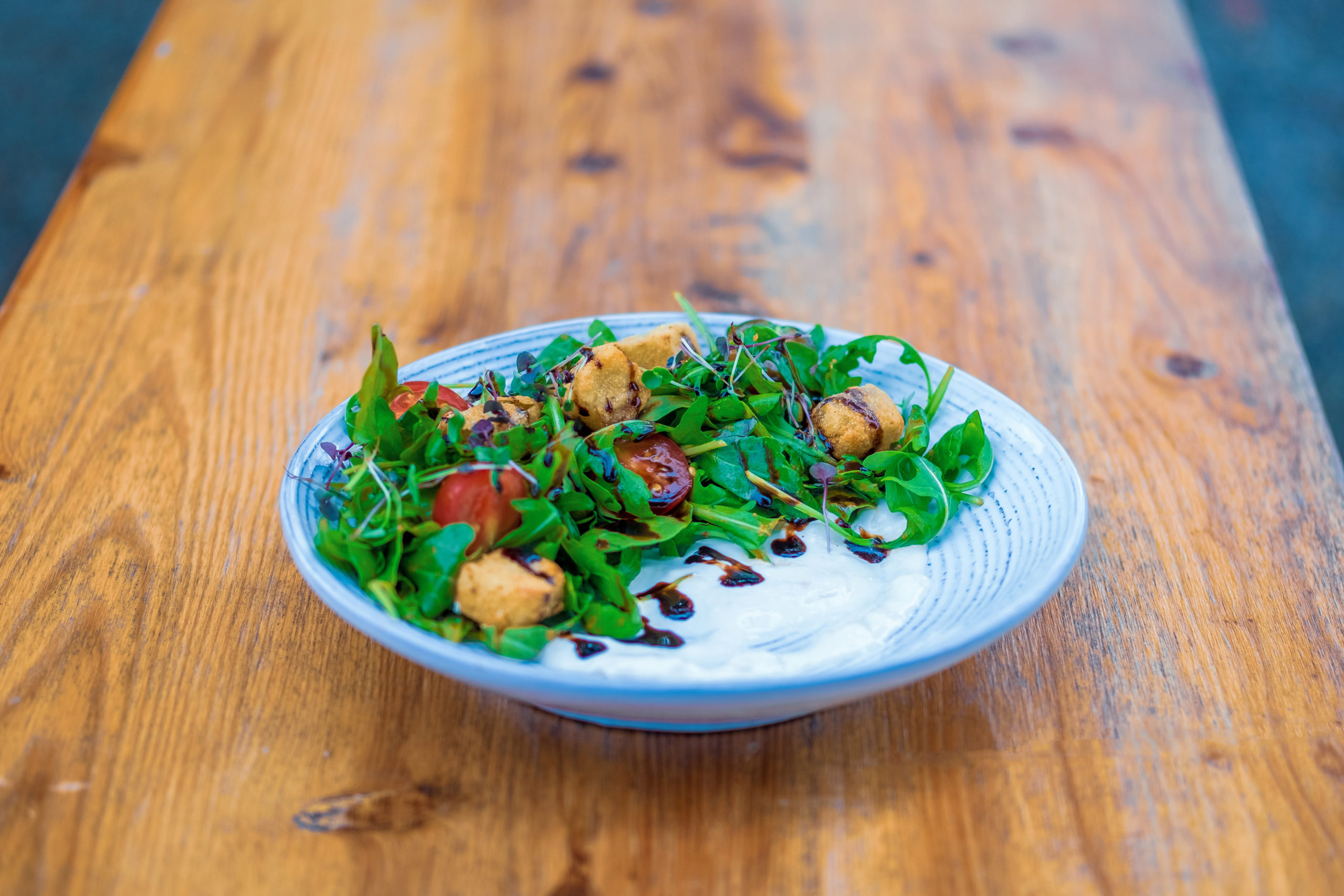 The Drexel Solutions Institute manages a number of research partnerships on behalf of the university with corporations, including with Comcast Corp., Lavazza, and FMC, among others. To date, nearly 200 students have assisted corporate partners with projects such as neuroimaging studies, market insights, and human-to-machine interactions. Industry partnerships have also supported 12 co-ops since Drexel Solutions Institute formed in 2018.

“We’re engaged in pushing the envelope on upcycling of food and research on many other commercial fronts,” says Suri. “The Drexel Solutions Institute connects our labs to industry, and brings industry problems back to academics. Eventually, these partnerships translate into coursework that is in sync with the market.”

Consider the panzanella. It opens a three-course menu that features a bouillabaisse entrée with confit tomato and concludes with a tomato gelati made with ricotta ice cream, tomato-and-strawberry granita, basil-and-tomato-seed pudding and tomato powder.

The following week, Lofink and Deutsch went over the suggestions and sketched out preliminary recipes and a menu. Lofink, for example, took a student’s idea to fry green tomatoes (plentiful on the vine this time of year but unlikely to ripen) and reimagined the panzanella with a flourish of fried green tomato croutons.

“I always say the best chef in the world can’t be more creative than a bunch of culinary students,” Deutsch says.

“When you’re a chef,” adds Food Lab’s Project Coordinator Rachael Sherman, who worked long hours in the industry and now helps run the ideation sessions, “you really don’t have as much time to sit and brainstorm. The groupthink is so valuable. Brian’s getting inspiration.”

“We pull from our past a lot,” Lofink agrees. “We create boxes and boundaries for ourselves. When you work with students, they have no boundaries, no boxes.”

In a brainstorming session focused on melons, he says a student suggested watermelon seed butter. “I would have never thought of that,” he says.

That type of creative collaboration was attractive to Wilson, a transfer student with an associate’s degree in math and computer science. She decided to pursue culinary arts first “for fun,” as she put it, and then as a profession. “I have always loved math,” she says. “I really like the academic rigor of mathematics and the problem-solving aspect of computer science.” 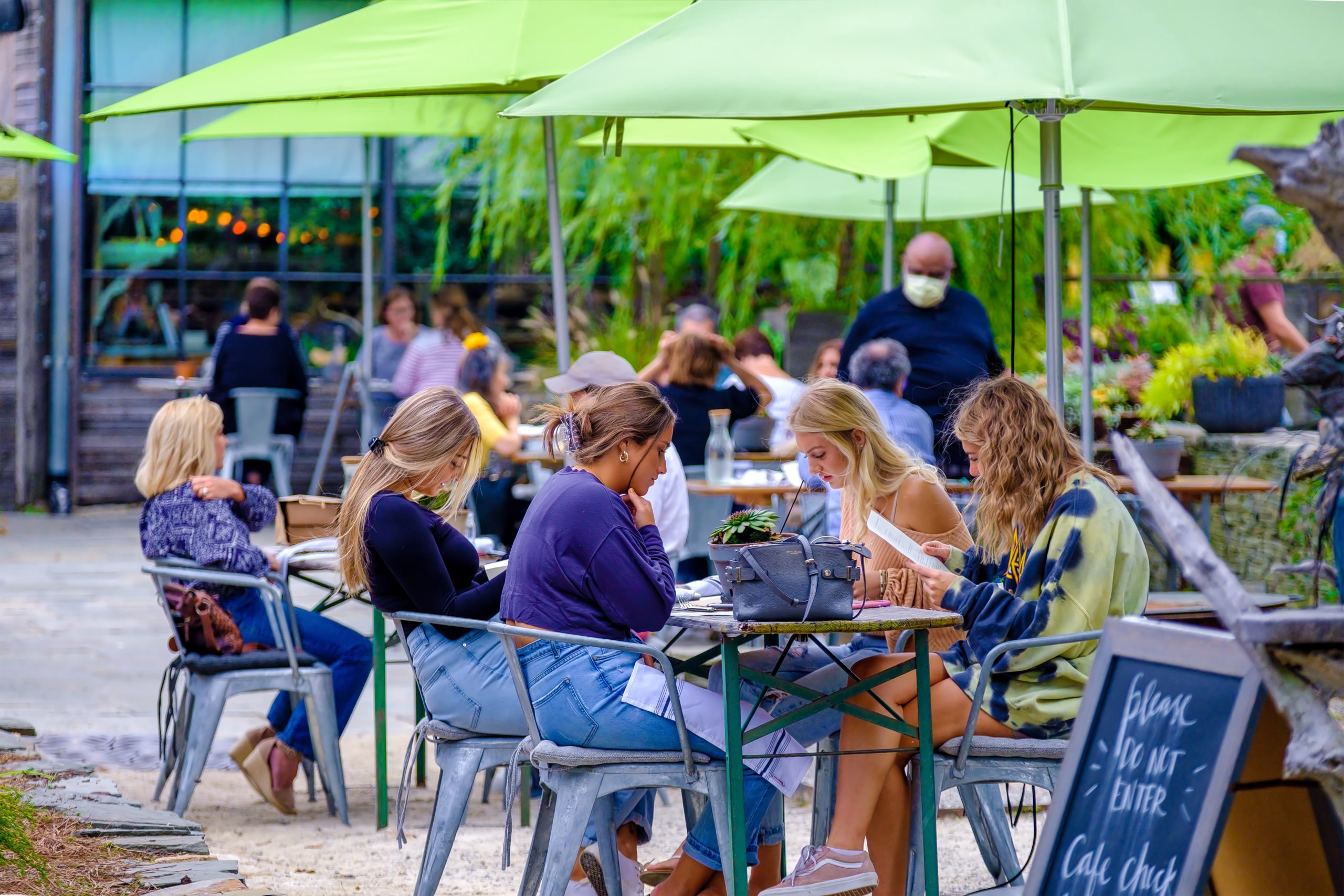 But, Wilson allowed, it can feel dry, even isolating. The culinary courses offered an entirely different experience — a chance to marry analytical thinking with creativity. “It was very hands on,” she says of the “Culinary Fundamentals” course. “It’s very different from a lecture- and text-based class. If you told me I had to take this super hard math class, I’d be OK. I’ll figure it out. ‘Culinary,’ I didn’t know if I could do this.”

She needn’t have worried. Wilson did well enough to land a co-op at the Four Seasons Hotel in Philadelphia. Then the pandemic hit, and to her dismay, the restaurant shuttered.

Drexel, though, delivered. Deutsch reached out to his Narberth neighbor Lofink, who had taught at the University and worked at the Dornsife Center for Neighborhood Partnerships as a community chef in the past. The terrain chef, who knew Wilson from an earlier co-op interview and had advised her to take the prestigious Four Season’s offer, was happy to offer her a summer spot when terrain reopened.

“I was so excited and relieved at the prospect of not only having a co-op,” Wilson says, “but also being able to learn from Chef Lofink and work with the team at terrain.”

Meanwhile, Lofink was chatting with Deutsch about Chef’s Fresh Picks as a way for terrain to highlight local and seasonal ingredients. Deutsch suggested the “whole food” approach and offered Food Lab’s help. Lofink liked the idea. “If you’re wasting,” he says, “I feel like you’re being lazy and not respecting the product.”

Wilson was eager to join the effort, and the experience has made her more committed to food sustainability, she says. She plans to continue at terrain after graduation, and to eventually pursue a graduate degree in food studies.

“What can we do today, what can we do differently and still do our job and serve delicious, amazing food?” Wilson asks. One small answer — the panzanella salad — was on its way to a table. “I love seeing practical ways to make this happen.”

Support culinary innovation, sustainability, and access to healthy food in our community!

Make a gift to the Drexel Food Lab