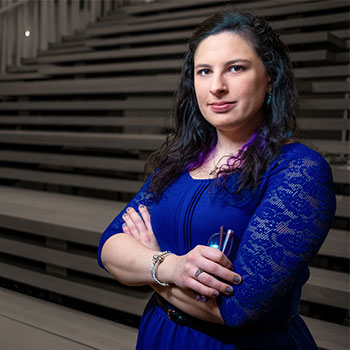 Shana Weiner knew from the time she was 12 that she wanted to work with victims of abuse. “I really wanted to be a real-life Casey Novak,” she said, referring to an assistant district attorney character on the TV show “Law & Order: Special Victims Unit.” At her first law school summer job, at the YWCA Victim’s Advocate Office in Annapolis, Maryland, she saw that she had a knack for connecting with domestic violence survivors. After graduating from Kline School of Law, she thought her chance to make a career out of it would be through the Philadelphia district attorney’s office. When that didn’t work out, she built her own nonprofit.

Now, in addition to her full-time job as a judicial law clerk at the Philadelphia Court of Common Pleas–Criminal Division, she is also the founder and executive director of Dinah, a nonprofit that offers legal services to survivors of domestic abuse in the Jewish community around Philadelphia.

Weiner, herself Jewish, says she liked the idea of serving the Jewish community. “I started looking for a Jewish organization in Philadelphia that was doing this sort of work as a complement to Women Against Abuse,” she said, referring to the Philadelphia nonprofit that serves about 12,500 women and children a year.

The change I’d most like to see in the world is…
“…domestic abuse completely eradicated from humanity.”

She was shocked when she couldn’t find one. Jewish survivors stay in abusive relationships nearly twice as long as the national average, and at the time (2013–2015) Philadelphia was one of America’s top 10 cities in terms of Jewish population. Yet, Weiner noticed, Philadelphia was only one of two cities on the list without any legal social service provider for the Jewish community.

In 2015, she founded Dinah. The name is a reference to the Old Testament story about the rape of Dinah. “In the story, Dinah’s rape is discussed by all of the men around, and we never hear from her,” says Weiner. “So part of the meaning of it is we give voice to the voiceless.” The group began serving clients in 2018.

While open to women of all religions and across the Jewish spectrum, Dinah is based in Jewish values and pays special attention to women of Orthodox Jewish faith, immigrants and the LGBT community. Weiner has found that the organization’s roots in faith “make it much more comfortable for folks who are Jewish to get help from a Jewish organization, even if they do not identify as religiously Jewish,” she says. Dinah also serves women in relationships where the violence is based in anti-Semitism.

The most common thing the organization does is file protection orders, but it also helps women with almost any legal service they need associated with intimate partner abuse, including family law, real estate/landlord-tenant, employment and immigration law. Weiner and other Dinah volunteers have served on panels for law enforcement, community groups and women’s foundations to educate others about the signs of intimate partner violence. “Most of the time, they don’t come waiving their hands with a sign saying ‘I’m a victim of domestic violence,’” Weiner says of survivors of abuse.

Right now, Dinah has five volunteer attorneys and Weiner hopes to increase to 10 to 15 this year. — Jen A. Miller