By Mike Unger
Posted in From the DAC, Fall 2019

The men’s basketball team has a mix of new and seasoned talent to lead them, they hope, to a great season. 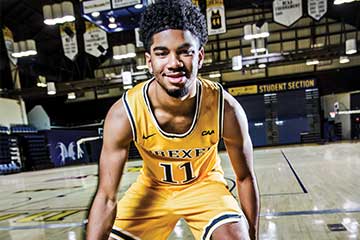 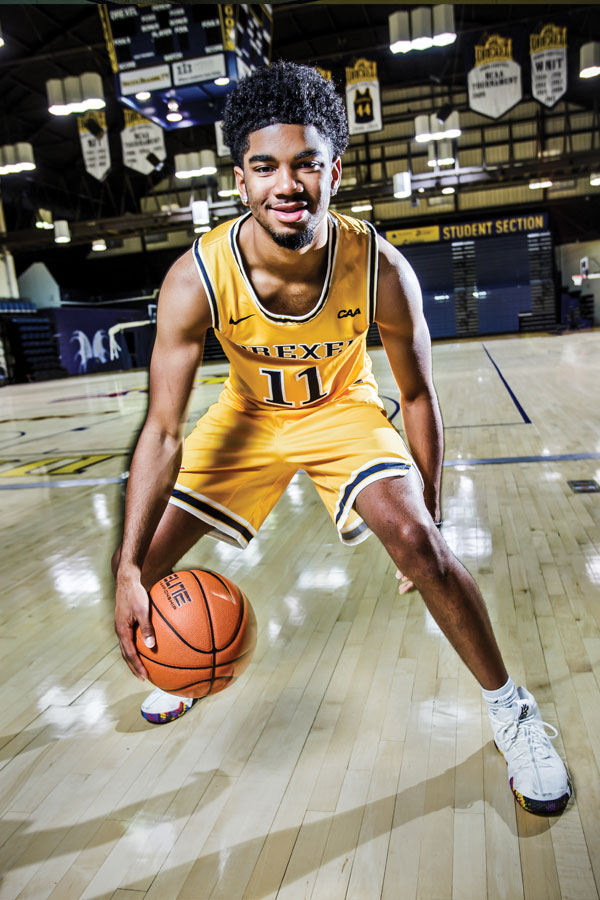 At first glance, last season was a tough one for the men’s basketball team, which went 13-19. But Coach Zach Spiker describes it as “a year of progress.” Nestled among the tough defeats was a victory at the College of Charleston that snapped the second-longest active home winning streak in Division I.

“I like where we’re headed,” says the fourth-year coach. “Each year has presented a different set of challenges, and you have to adapt and do things the right way to make our program as locked in as it can be.”

One of his reasons for optimism is Camren Wynter (pictured at right), a second-year student studying finance in the LeBow College of Business. Last year, the 6-foot-2 guard from Hempstead, New York, set a Drexel freshman record with 164 assists. He averaged 11.3 points and 4.6 rebounds on his way to being named the Colonial Athletic Association Rookie of the Year.

“What impresses me so much about Cam is how quickly he plays,” Spiker says. “He doesn’t have to score to impact the game. He delivers the ball on time and on target. When he does that it creates energy and gets guys fired up.”

Wynter says it took him some time to adjust to how much more physical college basketball is than the high school game, so he worked tirelessly this summer to improve his jump shot and get stronger. He was in the gym every day — literally — with his sights set on winning the CAA championship and taking home the conference’s player of the year award.

“If you don’t think you’re the best, you’ve already lost,” he says.

Junior James Butler is among the Dragons’ other key returnees. He averaged 8.2 rebounds per game last year, which was seventh in the CAA.

“He just grinds,” Spiker says of the 6-foot-8 forward. “He may be a little bit undersized, but he uses that to his advantage. He’s very strong, skilled and plays with a high motor. You play with a motor, things happen.”

Drexel will be boosted by the return of seniors Zach Walton and Kurk Lee, both of whom battled injuries last season. Coletrane Washington, Tim Perry Jr. and Matey Juric, who was honored as the team’s top defender last year, also return.

The newcomers include freshmen Mate Okros and T.J. Bickerstaff, whose grandfather and uncle both coached in the NBA.

Spiker likes the mix of experience and youth. It won’t take long for him to learn what kind of team he has: Drexel opened the season against city rival Temple University as of press time. Challenging games against LaSalle, Rutgers and South Florida follow.

“It’s been a close group,” he says. “I believe firmly that the closer you are off the floor the more success you can have on it. This group has invested in that time together, and I think it will be a fun group to watch.”

There’s a saying Spiker is fond of telling his team and recruits: energy and enthusiasm are kindling to the fire of success. The 2019–2020 men’s basketball team seems ready to strike a match.

Support from the basketball fans and Drexel alumni makes the team stronger. Show your support by making a gift today!

Make a gift to Drexel Basketball