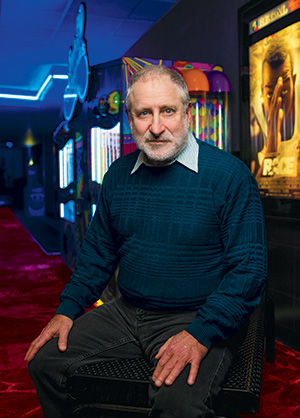 As a student, Bill Wine (BS mathematics ’67) used to make a point to walk around Drexel’s campus on days the school’s student newspaper, The Triangle, would appear.

“I loved glancing over and seeing someone reading my [film] review — I could tell what page they were on,” he recalls. “The first time I saw my byline, I was hooked.”

Those college bylines were the beginning of a long career as one of Philadelphia’s best-known film and TV critics, in print and on air. From 1990 to 2002, he was an Emmy-winning critic for Channel 29 in Philadelphia. Listeners have been tuning in to him on KYW Newsradio since 2001, and in 2006 he also began a movie spot on the city’s all-sports station, Sportsradio 94WIP.

Films were a near-obsession for him since he was 10 years old. That’s when his parents took him to see Alfred Hitchcock’s 1954 thriller, “Rear Window.”
One scene in particular made an indelible impression, when the villain, played by Raymond Burr, realizes that an incapacitated Jimmy Stewart, who lives across a courtyard in the same apartment complex, knows Burr killed his wife.

“I was frozen in my seat,” he says. “At the end of the movie, I didn’t think that I could stand up, it affected me so much.”

Wine’s major while at Drexel was in mathematics. Go figure. But after graduation, Wine taught courses in writing and film at his alma mater while also writing reviews for local newspapers.

And then a thought came to him.

“Before I was a movie critic, I was a television critic for the Philadelphia Daily News, and I went on junkets once a year to California, and there was a moment where I sat there thinking, ‘I’m interviewing people who are less creative than me. There’s something out of whack here,’” he says. “I didn’t give up my journalistic job, but I just thought, I’m always writing about other people’s work, I really ought to sit down and explore this, and that’s when I just started writing plays.”

He won several playwriting competitions, and in 1976 he went to Los Angeles. A year later, his initial effort, a musical called “Shrink,” was produced. It got off to a great start, both at the box office and with critics. Then he took a hit from one of his own. The reviewer for the Los Angeles Times didn’t like it.

“It was a total pan,” recalls Wine. The show’s producer told him the production was going to close.

“The actors were all upset, and they said, ‘Let’s call the critic,’ and I said, ‘Guys, that’s how I make my living. It’s someone else’s opinion,’” he says. (“Shrink” went on to be produced in several cities around the country. All told, nine of Wine’s plays have been produced.)

Wine returned to Philadelphia in 1981 and started teaching at area colleges and reviewing film for newspapers and magazines, as well as a local radio station. Then in 1990, the city’s FOX affiliate, WTFX, announced they were looking for a film critic.

“I wrote to the executive producer saying, ‘I have absolutely no experience [with TV], but you will not find anybody in Philadelphia who knows more about movies than me,’ and I know that sounds arrogant, but he called me in for an audition and he hired me. Of all the people who applied, I was the only one who had no TV experience. He said, ‘I can teach you the TV stuff in one day, but I want someone with a sense of humor,’” says Wine.

While the station’s film critic, Wine was nominated for a local Emmy eight times, winning three. In 2001, he started reviewing for KYW Newsradio, the city’s all-news station, where his witty reviews air several times a week, and his monthly 90-minute appearance on WIP gets listeners talking to him about his opinions.

“He’s so knowledgeable and funny, and like us he doesn’t take himself too seriously,” says Angelo Cataldi, host of the station’s top-rated morning show. “What I like about Bill is that he’s a lot smarter than me and he has very high standards for films, which I do not.”

This is a long way from the co-ops Wine did at Penn Mutual while studying math at Drexel. But without realizing it, that provided a foundation for him.

“Whatever analytics skills I have, I attribute to Drexel. I learned how to be analytical, and that certainly comes in handy in a critic’s career,” he says.