By Matt Erickson
Posted in From the DAC, Fall 2014

In the spring, the Drexel University Sailing Team was invited to the largest intercollegiate sailing regatta in the world. No matter that it was in France. They raised the money and the support to get there, and became Drexel's first club sport to compete overseas. 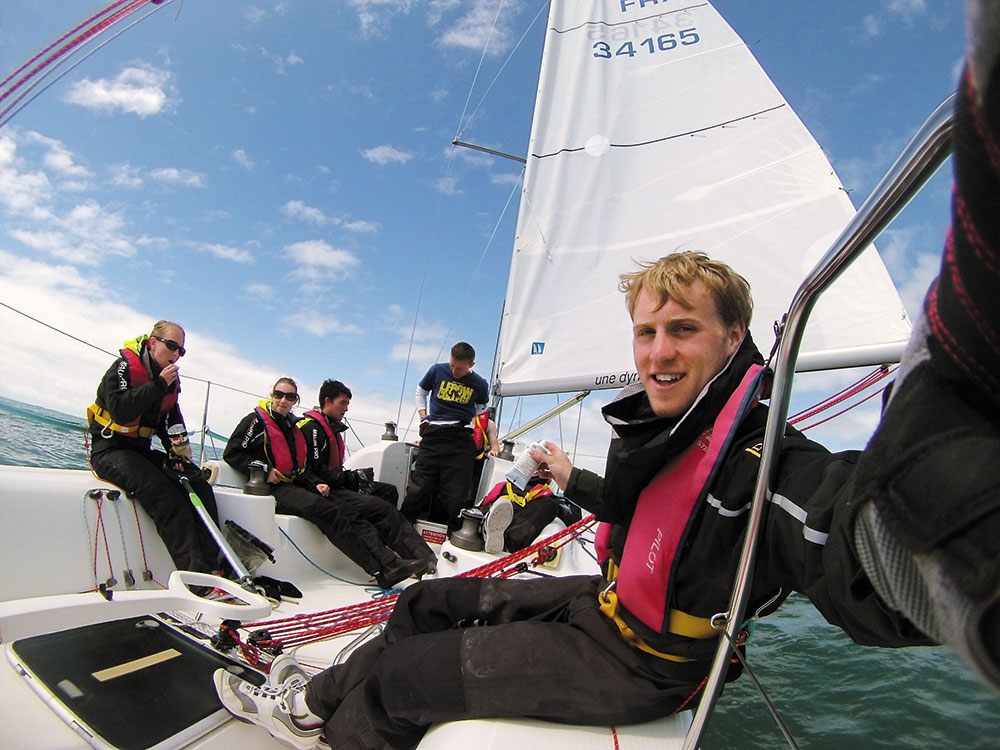 Every weekend during the spring and fall, members of the Drexel Sailing Team pile into their cars and head to competitions up
and down the East Coast, from Connecticut to Virginia. It’s a lot of travel, but that’s nothing compared to a trip the team took this past spring.

In April, the squad jetted off to Les Sables-d’Olonne, France, to compete in the world’s largest intercollegiate sailing event, the 46th EDHEC Sailing Cup. To get there, the team members had to take first place in their class in the Intercollegiate Offshore Regatta in Larchmont, N.Y., the biggest such competition in the United States, and also raise $30,000 for travel expenses. For their trouble, they were the first-ever Drexel club sports team to compete abroad.

At the event, about 3,000 students from more than 20 countries around the world race aboard about 180 boats. For the eight students making the trip, it was a solid week of sailing with the best collegiate competitors in the world.
And though boat damage caused by fierce winds forced the team to withdraw from the competition on its final day, it was still the experience of a lifetime, one well worth the effort, says senior Jakub Tyczynski, the crew’s captain.

“We all learned a lot,” Tyczynski says. “We pushed each other and ourselves to the limit.”

Tyczynski, an international student from Krakow, Poland, has been an avid sailor for about 12 years, even leading crews on several boats around Europe. Drexel’s sailing club was a big reason he chose to come to the University.

“You’re tired after work or after class, and you’re getting on the water, and sometimes it’s cold and it’s raining and it’s miserable,” Tyczynski says. “But you forget about that stuff when you get into the boat.”

The team, which normally competes in two-person teams aboard 13-foot boats, formed one eight-person crew in a 26-foot boat for the competition. The repeated eight-hour sailing sessions they’ve gone through together had already made them close over the course of the year, freshman Elizabeth Jarvie says.

“You’re still bonding with your teammates out on the water, even when you’re racing,” says Jarvie, who also made the trip to France.

Check out this video above, of the team’s experience in France.

To raise the funds for the trip, Tyczynski and several other students in the LeBow College of Business approached Drexel leaders with a presentation that resembled a business pitch to potential investors, emphasizing that Drexel’s name and logo would be displayed in several prominent places on their boat at an event with representatives from universities around the world.

The team successfully raised what they needed from several Drexel offices, outside sponsors and donors, including President John Fry. The funds allowed them to pay for tournament fees and travel costs. One team member actually jumped up and clicked his heels together when the goal had been met, Jarvie says. About 80 people helped the team in its effort in all, says Tyczynski.

Thanks to that help, the team got to head overseas to face some of the best student teams in the world, some of whom had hired professional skippers to lead their crews. The squad battled fierce winds and waves as high as 12 feet. But that just fueled their fire.

“Everybody would get up in the morning and be pumped to get on the boat, even though we’d been beaten up by the winds the previous day,” Tyczynski says. “We knew that we were lucky to be among a very few teams from the USA that represent their universities.”

On the last day of the weeklong event, the furious winds damaged the boat too much for the team to continue. They felt sad as they began to head back to the marina, Tyczynski says, but on the way back they saw that more than 20 other teams had also had to retire because of boat damage.

The experience was still well worth it, he said, and he can’t wait to shoot for a berth in the competition again in 2015.
“We’re sailing on the international stage, competing with the best student sailors in the world,” Tyczynski says. “You can’t beat that.”

The 2014-15 season is already underway, with the team in New York in October for this year’s Intercollegiate Offshore Regatta.
For the tight-knit group, the feeling of being out on the water is like nothing else, says Tyczynski, who will graduate in 2015. And thanks to their work, they got to experience it for a solid week in a new part of the world. The team hopes to go back to France again next year.

“You get on the water,” Tyczynski says, “and you just don’t think about anything else.”