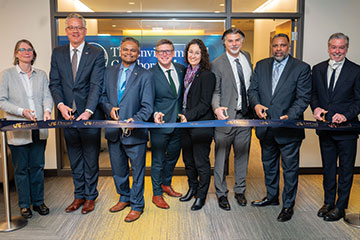 Sustainability and environmental justice are the foci of a new Environmental Collaboratory launched in early 2022 by the University and the Academy of Natural Sciences of Drexel University. The initiative will forge partnerships between academics, community members, industry and the public sector to pursue transdisciplinary, community-based solutions to environmental problems here and abroad.

Stanislaus previously led efforts to work with policymakers on the impact of polluting facilities in low-income neighborhoods in New York City and he successfully advocated for passage of the country’s first laws linking community-based planning with tax credits to rebuild impoverished neighborhoods. Working with the Environmental Protection Agency, Stanislaus led the federal response to the Superstorm Sandy and Deepwater Horizon disasters and helped address permafrost fracturing in Alaska that forced tribal communities to relocate. As a member of the Obama Administration, he represented the United States in discussions by G-7 nations that established an alliance to decarbonize and conserve natural resources in global supply chains.

He later joined the World Economic Forum, where he assembled CEOs, government officials, academics and leaders of nonprofits to tackle overlapping issues of business and environmental justice, such as human rights issues in the production of batteries and in the mining of lithium and cobalt.

The Collaboratory’s first project, supported by the inaugural Glenmede Environmental Collaboratory Research Fund, will be an assessment of actions needed to reduce lead poisoning in West Philadelphia.